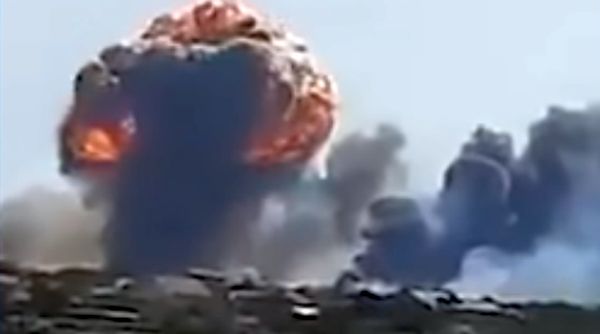 (19 FORTY FIVE) – On August 9, a Russian airbase in Crimea was devastated by a massive explosion that sent outside observers scrambling to identify what might have been used to strike the base, and what the blasts might portend for the future of Russia’s ongoing invasion of Ukraine. Military infrastructure like the airbase Novofedorivka, which is located near the city of Saky on the Russian-controlled Crimean Peninsula, has so far almost entirely escaped strikes by Ukrainian forces, but it appears that this status quo could be quickly vanishing.

Witnesses who were present in the area of the airbase at the time of the attack, which occurred at around 3:20 pm local time, reported a series of at least twelve explosions which occurred in quick succession, with the final blast occurring 30 minutes after the others and being more powerful than any that preceded it. At the time of writing, one person was reported dead and five injured by the blasts, according to Sergei Askyonov, the Russian governor of Crimea. Russian forces seized control of the airfield along with the rest of the peninsula in 2014, during which the base became a significant flashpoint between the remaining Ukrainian troops on one side and Russian troops, militias, and mobs on the other.