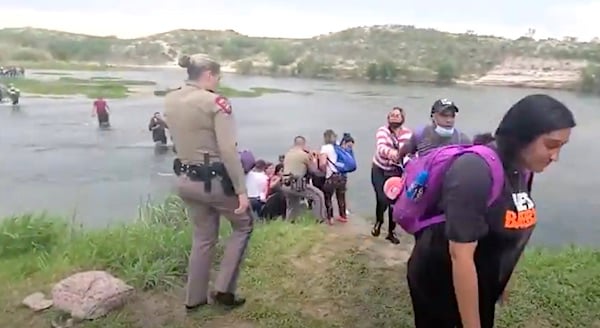 WASHINGTON, D.C. — I arrived at Union Station at 5:30 a.m. and there were only a few people around, including a mother and her 12-year-old son from the Dominican Republic, who had crossed the border days before. The pair arrived in the nation’s capital on a bus Republican Arizona Gov. Doug Ducey sent from the border and I met them days later, when they were catching a Megabus to New York City.

The mother and her son were joined by another family that left Venezuela on May 17, when they set out for a dangerous trek through south and Central America.

“The way here is very dangerous, in the jungle you see a lot of dead people, people who drowned, children, other than that, on the train they already stole from us several times. In Honduras, they stole from us, in Mexico. We lived [through] several things that were hard that we don’t wish on anyone,” the father with the family from Venezuela told me.

Ducey’s busing effort began in May to send a message to the Biden administration about its border policies and the influx of migrants crossing the southern border. Over 1,800,000 migrants have crossed the southern border so far in fiscal year 2022, according to internal U.S. Customs and Border Protection (CBP) numbers the DCNF exclusively obtained.

The Venezuelan family of five had no money and carried bags with food donations and clothes they had received from local nonprofits. They were hoping to get more aid in New York City.

I walked with the group to the bus terminal, where we waited for two hours, and over McDonald’s coffee and some breakfast “hamburguesas,” or hamburgers, they told me why and how they came to the U.S.

They survived some of the worst conditions and danger zones of the world, but the parents and their three kids, 17, 14 and 11, were in good spirits. When the family left Venezuela they took a bus to Colombia.

At one point, they had to take a boat into the notorious “Darien Gap” in Panama, where they walked by foot for 11 days in the jungle, surviving by drinking river water.

In 2021, Panamanian authorities recovered the remains of 50 people who died in the gap, but the number is likely only a fraction of the deaths, The Associated Press reported in October. The pathway connecting migrants to North America is one that risks assault, according to Doctors without Borders, which treated 396 women who endured sexual violence between April 2021 and March 2022.

When I last visited the border, I met a woman who survived the jungle alone. She was in tears and had what appeared to be some minor injuries to her legs.

Like that woman, this family survived the perilous passage.

They traveled through Costa Rica, Honduras, Nicaragua and Guatemala to reach Mexico, where they joined a caravan of around 3,000 people. Mexican immigration authorities granted the group permits that allowed them to move through the country by jumping on top of the train, which is known as “la bestia” or “the beast” by many migrants.

Once they made it to the Mexican border with Arizona, the family paid a smuggler or “coyote” $100, which the mother described as “cheap.”

“But he left us alone. He didn’t take us to the other side,” the mother said, adding that they crossed the river and turned themselves into U.S. Border Patrol in the Yuma sector.

Yuma sector Border Patrol facilities have been at 115-160% capacity, according to Ducey’s office. In May, I observed Border Patrol apprehend large groups of migrants and hundreds of them crossing each day in the sector.

Ducey announced Friday that he would complete a border wall of shipping containers in an area of Yuma known as “The Gap,” which has been popular for migrants crossing the border illegally.

“Immigration here in the U.S. had us in Arizona. They had us there two days and they let us go and they gave us a bus, up to here to Washington and to an organization, and the organization gave us tickets to New York. And, in New York, another organization will receive us that gives help so that we can have a place to sleep because we have no place to go,” she said.

The migrants said they were happy to be out of Venezuela, where socialism ruined the country, and in the U.S, a beacon of freedom.

“Because, like the Latinos say, the United States is the land of opportunity. If one is able to get to this country, here they help immigrants a lot and mostly to children, they lend us help economically, academically, a roof, a home to live,” the father from Venezuela told me. “And, in Venezuela, the situation is critical, there is nothing, we don’t have anything.”

“There are no jobs, there is no food. In the schools, there are no teachers, doctors, they immigrated,” he said. “Socialism destroyed the country.”