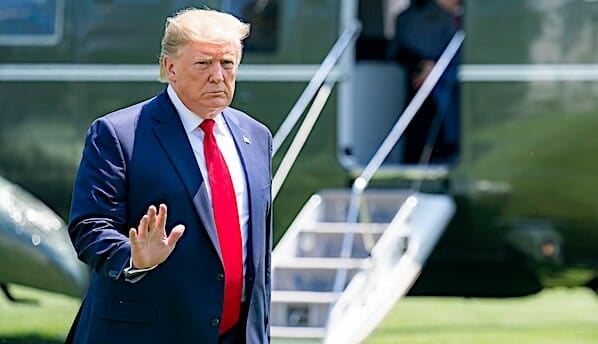 Longtime liberal Harvard law professor Alan Dershowitz, a recognized expert on the Constitution and America's law, says this week's raid by the Biden administration on President Trump's Mar-a-Lago home is an example of the Democrat's improper use of government power against his political opponents.

"A raid is supposed to be a last resort, but this administration has used the weaponization of the justice system against its political enemies," he told the Rob Schmitt Tonight show, according to a Daily Mail report.

The publication explained the raid "represents a dramatic and unprecedented escalation of law enforcement scrutiny of the former president."

Dershowitz pointed out what the Biden administration has done already: "It's arrested people, denied them bail, put them in handcuffs – used all kinds of techniques that are not usually applied to American citizens, and I just hope this raid has a justification. If it doesn't have a justification, the material seized in it will be suppressed."

Dershowitz said the "law is clear."

"You don't engage in a raid unless you've exhausted all the other remedies – unless you believe that the person rated will destroy the evidence."

Trump associates, meanwhile, confirmed he and his organizations had been cooperating with the government's request for information.

Dershowitz, appearing later on Fox News, said, "Based on what we now know, it was totally unjustified, even one FBI agent would have been too many. The whole process was wrong and Trump was away at the time, so they can't say he was going to destroy anything."

Another constitutional expert, Jonathan Turley, told Fox, "The Presidential Records Act is not commonly a subject of criminal prosecution, even in the most egregious cases. These incidents have generally been handled administratively."

The FBI raid, however, does support the idea that the Democrats in power in Washington now are so fearful of Trump that they will go to any lengths to try to deter him from running again in 2024.

In fact, many critics of the Democrats consider Nancy Pelosi's special partisan committee looking into the Jan. 6, 2021, riot as a third attempt to destroy Trump. It's a partisan committee because Pelosi refused to seat nominees from the minority GOP, and instead picked two GOP members who would go along with her anti-Trump agenda.

She previously failed at an impeach-and-remove scheme while Trump was in office, and even failed a second time with such a campaign illogically pursued days after he left office.

Trump on Monday said the search was no more than a "weaponization" of the DOJ by the Democrats, who "desperately don't want me to run for president in 2024."

The report suggested the allegations against Trump concern his handling of federal documents. Ironically, the Biden DOJ was being sued at the same time for mishandling federal documents, papers that the Trump White House had ordered released to the public but still have remained hidden.

Those concerned the earlier weaponization of the DOJ, when the FBI made up facts and triggered a federal investigation of claims Trump's 2016 campaign colluded with Russia, a conspiracy theory that since has been debunked.

During that 2016 run, James Comey, who then was FBI director, found that Democrat candidate Hillary Clinton had sent classified information to her private and unsecure email system, but claimed she didn't have intent to break the law and no charges were filed.