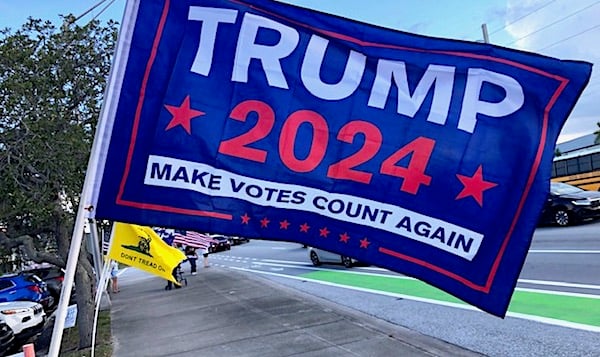 Election interference was essentially allowed to run rampant during the 2020 presidential election. Ballot drop boxes, mailed ballots, nursing home workers filling out ballots for incapacitated residents, all were part of the problem.

Now a report from Chuck DeVore at the Federalist says the interference agenda has been "institutionalized."

That's because the U.S. Postal Service has announced a new "Election and Government Mail Services division," that will be set up.

"Starbucks recently asked the National Labor Relations Board to suspend all pending and ongoing votes to unionize at its U.S. stores due to concerns stemming from mail-in ballots. The franchise’s objections once again raise questions about the credibility of election systems that rely on mail-in ballots," DeVore explained.

But "how much more with the American electoral process? With hundreds of millions of dollars of campaign material and increasing numbers of ballots in the mail, postal efficiency and honesty are becoming increasingly vital to free and fair elections."

On social media, he said, "U.S. Postal Service creates new dedicated division to handle election mail. The Election and Government Mail Services is part of an effort to effectively deliver mail-in ballots to voters and elections offices in advance of the 2022 midterm elections."

DeVore explained, "The rationale for this new division is that the growing use of mail-in ballots requires extra attention to ensure the greater volume of mailed ballots can be handled by an increasingly overburdened USPS. The USPS reported it delivered more than 135 million ballots in 2020, with 40 million delivered so far this year during the primaries."

But it is the leftists who have advocated for mail-in ballots, and studies have shown they are more susceptible to fraud than in-person ballots.

"Elections conducted by mail have been a longtime goal of Elias and others since long before public health fears over in-person voting during the COVID-19 pandemic," DeVore said. "It is instructive to note that most European nations found mail-in ballots to be susceptible to fraud and limited their use."

He pointed out mailed ballots can be cast by someone other than the voter, voter ID measures are harder to have, and then there are those "professional ballot traffickers who 'help' the voter fill in their ballot."

That's why, he said, "mail-in ballots will be an increasingly important part of the Democratic election playbook."

He commented on whether the public should be concerned about the USPS plans for mail-in ballots.

Further, the Postal Services unionized workforce, through the National Association of Letter Carriers, "is an affiliate of the AFL-CIO and endorsed Biden in 2020. It represents 277,000 workers."

And, he said, the American Postal Workers Union also endorsed Biden. It represents another 330,000 workers and is also under the AFL-CIO umbrella, he said.

"If there was a concerted effort to hinder election mail, the Postal Inspection Service likely wouldn’t notice it in time to stop it and prevent selective delivery of the mail from tipping an election."

DeVore is the chief national initiatives officer with the Texas Public Policy Foundation.