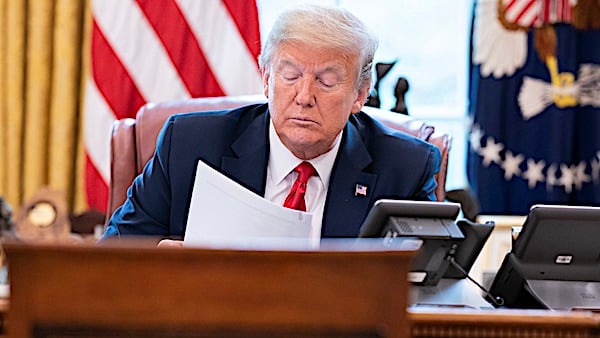 President Donald Trump is demanding the Joe Biden administration release – without censoring – the affidavit used by the FBI to stage a raid on Trump's Florida home, a raid during which a report already has confirmed agents stole Trump's passports.

"There is no way to justify the unannounced RAID of Mar-a-Lago, the home of the 45th President of the United States (who got more votes, by far, than any sitting President in the history of our Country!), by a very large number of gun toting FBI Agents, and the Department of 'Justice,'" Trump said on social media. "But, in the interest of TRANSPARENCY, I call for the immediate release of the completely Unredacted Affidavit pertaining to this horrible and shocking BREAK-IN."

The FBI staged its raid when Trump was not at his home, allegedly in pursuit of presidential documents.

This is in direct conflict with the standards used by the federal government for other presidents, especially since Trump already was cooperating with the Washington bureaucracy as the documents from his first tenure in the White House were being sorted out.

The Washington Examiner said while the search warrant was released, he wants the public to have access to the underlying "affidavit" created by the FBI or DOJ.

And he called for Judge Bruce Reinhart, who is overseeing the case, to be recused.

The DOJ is arguing in court that it wants to keep its claims concealed from Trump and the public.

The filing from the Biden administration claimed the document is a "roadmap" to the "ongoing investigation."

The government claimed its release would "compromise" its "investigative steps."

"The fact that this investigation implicates highly classified materials further underscores the need to protect the integrity of the investigation and exacerbates the potential for harm if information is disclosed to the public prematurely or improperly," the government claimed.

According to Fox News, Trump's call for public access to government information came after the DOJ demanded in court that the details be withheld.

Trump has asserted that the search and seizure by the Democrat-run DOJ are just part of a political plot to prevent him from running for president in 2024, for which he already is the leading GOP candidate.

Democrats already have provided ample evidence for just that contention, with House Speaker Nancy Pelosi's two failed attempts at impeaching and removing Trump – once after he already had finished his term.

Then there is the partisan Jan. 6 committee that has been "investigating" the Jan. 6 riot, but has allowed only evidence against President Trump, not any statements that would defend him.

Nor has it attempted such basic interviews such as asking Pelosi, whose responsibilities include the security of the Capitol, why she rejected President Trump's suggestions for extra security that day.

Many of the Democrats' schemes against Trump appear to be intended to prevent him from running for office again, and they have claimed any violation of procedure involving presidential documents could provide those grounds.

However, constitutional experts point out that the qualifications to run for president are specified in the Constitution, which does not provide an option to disqualify someone for making a paperwork mistake.