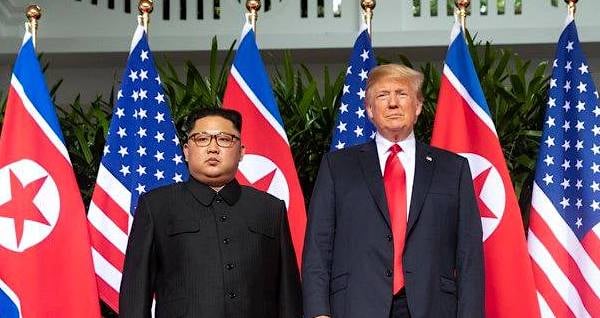 A new report describes that during military joint exercises involving the United States and South Korea this year will include a deliberate affront to North Korea's Kim Jong Un.

The Daily Beast said, "The U.S and South Korea are about to play war games again, and this time they’re going for the jugular."

The report explained soldiers for the two nations "will polish up what military people … call the 'kill chain' in which they target the North's missile and nuclear sites plus bases needed to supply, refuel, and rearm them."

And, the report said, sources have said the alliance will play games that include a "decapitation" exercise where "they play at invading the heart of the North Korean command structure and taking out the leader, Kim Jong Un."

According to the report, the activities are only "a game," but the real Kim Jong Un, dictator of North Korea, is "sure to take it personally as he did in September 2017 when he ordered the North’s sixth, and most recent, nuclear test after that year’s war games."

The report said the U.S. is not acknowledging formally or officially that "decapitation" is on the practice agenda this year.

But The Daily Beast reported sources familiar with the exercise say that's the unofficial name of the game.

The issue is a volatile, unstable, and paranoid Kim, who, the report said, already is "fearful of assassination, wary of discontent among his own poverty-stricken people" and already tightening security.

His distrust of everyone allows him to move about at night, in different vehicles, accompanied by bodyguards, the report said.

"Decapitation is a mission to capture or kill a high-value target, e.g., manhunting," David Maxwell, a retired U.S. Army Special Forces colonel said in an interview with the Beast. "If you get the head of the military forces (which is Kim Jong Un), theoretically you gut the head of the snake."

The games are being held under agreement between U.S. Defense Secretary Lloyd Austin and South Korea Defense Minister Lee Jong-sup, and are to begin later this month.

The last time such games were held, some 70,000 South Korean and U.S. troops participated.

The events are developing just as tension between the North and South is growing.

North Korea's dictator has promised to "annihilate" South Korea, in response to reports the South was considering an attack on his nuclear facilities.

"Analysts are convinced North Korea is ready for its seventh nuclear test—its first since 2017—as the Americans and South Koreans target Kim and his closest aides in another decapitation game," the report explained.

Multiple analysts expressed concern that North Korea could turn any sort of dispute or disagreement into a full-scale war, with or without nuclear weapons.

It was Steve Tharpe who expressed to The Daily Beast his opinion that a preemptive strike against North Korea would lead immediately to war essentially without limits.