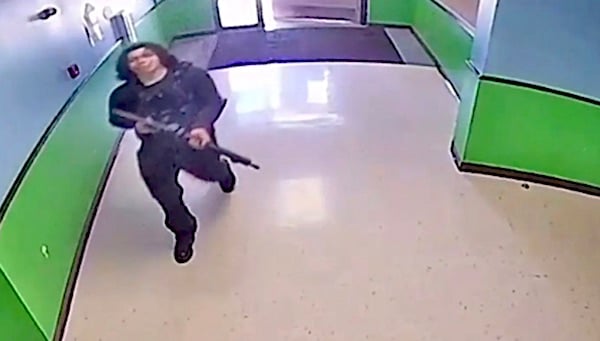 Salvador Ramos roaming the hallways of the Robb Elementary School in Uvalde, Texas, on May 24, 2022. (Video screenshot)

A lawyer revealed plans Sunday for a $27 billion lawsuit against a number of institutions and other parties on behalf of victims and survivors of the Uvalde, Texas, school shooting, according to San Antonio ABC affiliate KSAT 12.

Law Offices of Bonner & Bonner’s Charles Bonner announced that his firm’s civil rights lawsuit on the matter will list law enforcement including Uvalde Schools Police Chief Pete Arredondo, city police, sheriffs, Texas Rangers, “border patrol” and the Texas Department of Public Safety (DPS) as defendants, the outlet reported. Bonner added the yet to finalized suit will also implicate the school board, City of Uvalde and the city council, as well Daniel Defense, manufacturer of the gunman’s weapon in the shooting, and the Oasis Outback store where he bought it, according to the station.

The lawsuit, which was announced Sunday, is going after several law enforcement agencies as well as the manufacturer of the gun used in the massacre.
https://t.co/qLgodboJpp

A shooter killed 19 children and two teachers at Robb Elementary School on May 24 before police killed him, according to The Associated Press.

“People have a right to life under the 14th Amendment and what we’ve seen here is that the law enforcement agencies have shown a deliberate conscious disregard of life,” Bonner said, according to KSAT. He is separately representing victims of the May 14 Buffalo, New York, mass shooting, the station said.

The perpetrator of the May 24 shooting killed 19 children and two teachers at Uvalde’s Robb Elementary School before being killed by police, according to The Associated Press. Texas Department of Safety Director Steven McCraw had previously claimed 19 officers spent more than an hour waiting for tactical gear, a sniper and classroom keys before breaching the classroom to confront him.

Arredondo reportedly resigned from the Uvalde School Board July 2. The board is set to meet Wednesday to consider firing him as police chief, according to the Austin American-Statesman.

“It is against CBP policy to comment on pending litigation,” U.S. Customs and Border Protection representative told the Daily Caller News Foundation.

A City of Uvalde spokesperson told the DCNF that it “does not comment on current, pending, or future litigation.”