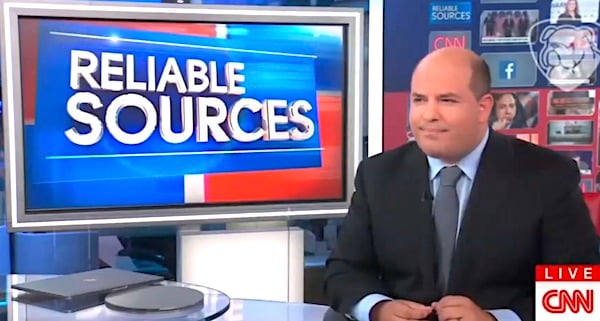 Brian Stelter fighting back tears during his final broadcast of 'Reliable Sources' after being fired by CNN, Sunday, Aug. 21, 2022. (Video screenshot)

A veteran CNN commentator who was fired this week and whose entire show was canceled by the network appeared to be fighting back tears during his farewell broadcast on Sunday.

One person is heard clapping off camera once Stelter completed his sign-off.

Posting a video clip of the departure, Jack Posobiec, senior editor at Human Events, noted: "Brian Stelter struggling to hold back tears as he ends his last broadcast."

Brian Stelter struggling to hold back tears as he ends his last broadcast pic.twitter.com/mv7Hpav2AL

"The fact only one person is clapping at the end," Posobiec added.

Former President Donald Trump commented Friday about the network's boot of the left-wing pundit, stating: "Brian Stelter of Fake News CNN got fired because he lied, and lied, and lied – ABOUT ME."

"May he REST IN PEACE!" Trump added.

CNN's Brian Stelter last year on Michael Avenatti running for president: "And looking ahead to 2020, one reason I’m taking you seriously as a contender is because of your presence on cable news.” pic.twitter.com/2Wn2bX17kx

In one remarkable broadcast in July of last year, Stelter was verbally shredded for his own arrogance by one of his own on-air guests.

"I think you yourself, you know, while you're a nice guy, you're full of sanctimony. You become one of the parts of the problem of the media," said Michael Wolff, author of the tell-all "Fire & Fury: Inside The Trump White House."

"You know, you come on here and you have a monopoly on truth, you know exactly how things are supposed to be done. You are one of the reasons why people can't stand the media. Sorry! It's your fault!"

Wolff then gave Stelter some advice.

"Don't talk so much," Wolff cautioned. "Listen more. You know, people have genuine problems with the media. The media doesn't get the story right. The media exists in its own bubble."

The author even compared Stelter to Trump.

"Also, you're incredibly repetitive. It's week after week, you're the flipside of Donald Trump," Wolff continued. "You know, 'fake news,' and you say 'virtuous news.' There's a problem here."

Online reaction Sunday to Stelter's final broadcast was not flattering: