Filmmaker Dinesh D'Souza, born in India, has produced a string of amazing documentaries. They include:

His latest achievement is called "2000 Mules," which was released back in May.

Critiques like the New York Times accuse "2000 Mules" of simply "repackaging … Trump's election lies." But that is an unfair oversimplification and accusation. Dinesh is a much greater intellectual than to produce a documentary in such regurgitating terms.

What Dinesh did in "2000 Mules" was to examine the evidence for voter fraud in the 2020 election by tracking digital device location data of "mules," or individuals who stuffed voter drop boxes with stacks of completed ballots, especially in swing states.

Before you criticize the premise as impossible, or believe someone else's conclusions (even mine), you should watch the documentary (available online) and examine the evidence for yourself. It contains digital, telecommunication and video evidence of ballot box stuffing occurring by the same individual in multiples areas. As I'll share in a moment, this all makes a huge difference because modern elections are now determined by drop-box and mailed ballots.

Again, though Dinesh's liberal critics have accused him of having "too many gaps" in his evidence, I would say to them that his evidence between the alleged "gaps" is sufficient to make a case for examination. Any fraud is too much fraud, whether it was enough to sway the election or not.

That is exactly what led a group of sheriffs across the country to question federal election integrity.

Joshua Philipp, an award-winning investigative reporter with The Epoch Times and host of EpochTV's "Crossroads" program, reported in July how in one episode:

A group of sheriffs is launching an initiative to review and investigate evidence of election fraud shown in the film "2000 Mules" by Dinesh D'Souza. The sheriffs are part of the Constitutional Sheriffs and Peace Officers Association (CSPOA) and could bring criminal charges, depending on their findings.

We speak with Richard Mack, former sheriff of Graham County, Arizona, and founder of CSPOA. He explains how sheriffs have begun their investigations, the laws separating the federal government from local law enforcement, and the importance of investigating election fraud.

If the federal government will not launch an investigation into mail ballot election fraud as they have on the Jan. 6 Capitol protests, then my wife, Gena, and I are in full support of these sheriffs and encourage other law enforcement across the land to join them.

You can believe or disbelieve in 2020 election fraud; that is your American right. However, the question is: Is it possible that it really occurred in some way, shape, or form? Whether fraud contributed to the win or loss of your favorite candidate's election is secondary compared to whether or not any form of corruption occurred in the national election.

When a couple dozen other states just "request" and not "require" some form of official identification to vote, do we not think corrupt forms of "people proxy voting" occur, especially when so much is on the line with presidential elections?

When the Public Interest Legal Foundation (PILF) published an official report based upon solid evidence that "tens of thousands of cases of possible voter fraud" occurred (including ID theft and dead people voting), shouldn't our representatives seek election reform that at very least minimizes cheating?

For example, the PILF discovered errors in elections dating back to the 2016 presidential election:

This kind of data is why the Heritage Foundation concluded, "The threat of vote fraud is real – and it could make a difference in a close election." Like 2024?

Election investigation is warranted right now based simply on the fact that Joe Biden received 13 million more votes in 2020 than mega-popular Barack Obama did in 2008, when Obama set a record of votes for any presidential election before and despite Biden is the most unpopular presidential candidate and leader since the founding of our republic.

Is it plausible that the least-popular candidate in history (Biden) could beat one of the most-popular incumbent presidents (Trump) by a record-breaking 7 million votes: Biden with 81,282,916 votes compared to Trump with 74,223,369? Is it also plausible during a global pandemic that there would suddenly be an overall 7% increase in voter turnout across the country in 2020 compared to 2016?

What's also suspect about those 7 million additional 2020 votes for Biden is the fact that the majority were received by mail. Is it a mere coincidence (or "just because of COVID") that, for the first time in 30 years, voting by mail soared across the country while voting in person dropped off the grid? What a convenient, perfectly-timed political pandemic!

Check out this graph: 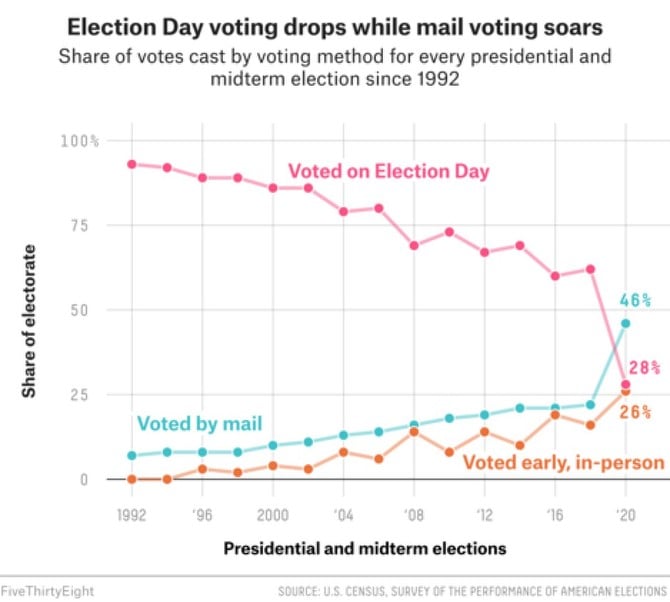 Bottom line: Is the extensive suspicion of election fraud (held by more than 40% of Americans) really far-fetched? Are sheriffs across the country wrong for investigating voter fraud now? Absolutely not.

Gena and I thank, congratulate and commend Dinesh D'Souza in being willing to stand up for the truth, especially in the face of his own personal sacrifices and risks.

You can like or dislike Dinesh or his documentaries, or even call him jaded and a demon, but you can't deny the core of his facts, and the right that Americans have to know the truth.

As our second president, John Adams, said, the people "have a right, an indisputable, unalienable, indefeasible, divine right to that most dreaded and envied kind of knowledge – I mean of the character and conduct of their rulers."

(Again, please watch ASAP the "2000 mules" documentary – available online – and examine the evidence for yourself.)

Chuck Norris
Chuck Norris is the star of more than 20 films and the long-running TV series "Walker, Texas Ranger." His latest book is entitled The Official Chuck Norris Fact Book." Learn more about his life and ministry at his official website, ChuckNorris.com.
The new Miss Universe learned karate under me
Online sexual predators target our kids – learn to fight back!
Biden's bonkers & blind-as-a-bat first border visit
This New Year's resolution can make you healthier & happier
Why our founders didn't celebrate the holiday like we do
See more...