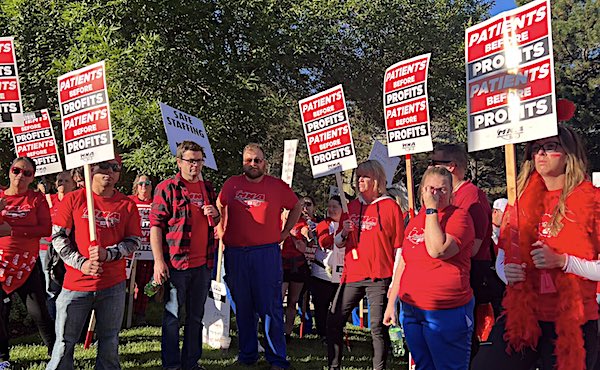 Nurses on strike in Minnesota in September 2022.(Courtesy Minnesota Nurses)

The MNA is demanding a 30% pay increase over the next three years, in response to staffing shortages, but hospitals, who have offered around 10% raises, say they simply can’t afford that expense, according to Axios. The union initially filed to approve the strike on Aug. 15, after months of negotiations failed to reach a solution both sides could agree with, local news station KARE 11 reported.

“Essentia Health is disappointed that the MNA is focusing its efforts on a strike instead of at the bargaining table, where real solutions are found,” said hospital management company Essentia Health in a statement to KARE 11. The company went on to say that the MNA has repeatedly refused requests for mediation, and that a pay increase of the magnitude the MNA requests is irresponsible.

We’re just minutes away from 15,000 Minnesota nurses hitting the picket line! Nurses say they’re walking off the job because they want better pay. But they also want solutions for short-staffing, retention, and better patient care. This strike will last for three days. @kare11 pic.twitter.com/gacXy74sqT

“Hospital executives with million-dollar salaries have created a crisis of retention and care in our healthcare system, as more nurses are leaving the bedside, putting quality patient care at risk,” said Mary C. Turner, President of the Minnesota Nurses Association in a statement. “Nurses do not take this decision lightly, but we are determined to take a stand at the bargaining table, and on the sidewalk if necessary, to put patients before profits in our hospitals.”

Temporary nurses were recruited by the thousands and hired to five day contracts in order to fill the gaps in coverage, the local Star Tribune reported. Some hospitals reported delays in elective surgeries, but remained confident in their ability to maintain care.

“These are very seasoned nurses,” said president David Joos of Abbott Northwestern Hospital in Minneapolis. “We’re not in 48 hours teaching them how to be a seasoned, high-quality-care nurse.What we are doing is orienting them to our environment.”

The nurses’ strike would be one of two historically large strikes back-to-back, should a railway strike that companies predict would cost $2 billion dollars per day be authorized this Friday. In contrast to the hospitals, railway companies are offering rail workers a 24% raise, the highest in nearly 50 years, according to the Association of American Railroads.

Railway workers expressed alleged terminations for taking sick days or going to the doctor’s office, according to a joint statement on Sunday by the Brotherhood of Locomotive Engineers and Trainmen (BLET) and SMART Transportation Division (SMART-TD). .