There have been many reports of abuse unleashed against those arrested for nothing more than being at the Capitol on Jan. 6, 2021, when a few hundred people rioted, and vandalized parts of the building.

It started off with the coordinated attacks by those prosecuting – and hearing – the cases that no one would be allowed out on bail, meaning some Americans have been in jail already a year and a half for misdemeanors.

Then there are the complaints of mistreatment from those behind bars, and the newest report, documented by the Gateway Pundit, is perhaps among the worst.

In this situation, a "bully guard" assaulted a prisoner by spraying him in the face with Mace, repeatedly, for not wearing a face mask.

Ronald Colton McAbee was maced repeatedly "for removing his face mask to take his medication," the report said.

Then, the report explained, "The Tennessee man was then left in a cell covered in the spray for over eight hours of torture, unable to de-contaminate and rinse off his burning skin."

The report charged he "was employed by the Williamson County Sheriff’s Office in Tennessee before he became a political prisoner of the Biden Regime. He has been detained for over a year as he awaits trial with a date set for September of 2023." 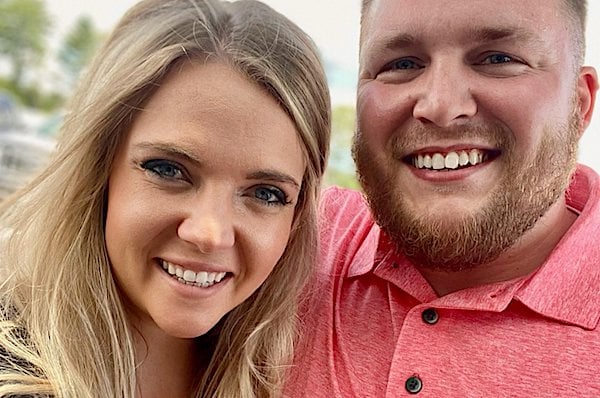 Ronald McAbee and his wife Sarah before his detainment.

The report cited "multiple witnesses" to the attack and said those confirm, "McAbee was assaulted by Lieutenant Crystal Lancaster, a guard in the prison with an alleged past of mistreating January 6th defendants."

One account said, "Two good men, Ronald McAbee and Ronald Sandlin have been pepper sprayed and assaulted and taken to the hole. Mr. McAbee was attempting to get his morning medication when one Lt. Lancaster assaulted him and sprayed him with OC spray. This is the type of thing we are used to here in C2B of the DC Gulag. Staff assaults. Violence under color of authority. We are considered and called insurrectionists by the staff here. One thing is for certain- they will be back. It is getting to the point where they are going to push too far. We need prayers for the men in the hole, for their families. For a quick end to this persecution of the American people. We are alone, a thousand miles from home and all we have is each other. We are willing to fight. #justice 4J6"

Another witness, The Gateway Pundit said, reported: "We are currently on lockdown. Today has been another day of physical abuse and violence toward us in here. This time Lt. Lancaster shoved Ronald McAbee and then maced him in the face for only attempting to get his morning meds at roughly 11:45am from the nurse without wearing a mask. McAbee was taking medication and then walking back to his cell when Lt. Lancaster assaulted him for not wearing a mask! Then she kept spraying him in the face and people in here were yelling at her to stop! She sprayed him a second time while he was being cuffed."

That witness continued, "He was nonviolent and not combative. Lt. Lancaster gave him no warning and never called for assistance as she is mandated to do before she sprayed him with the 'dangerous/deadly' weapon so many Jan 6ers are charged with."

Tina Ryan of Citizens Against Political Persecution said, "Although the Biden Regime has put mask mandates on hold until after the November election, the DC Gulag is still torturing the January 6th political prisoners with these unconstitutional mandates."

According to the J6 prisoners, they have to wear masks at all times unless they are eating and drinking. Even then, they have to pull the mask down to take a sip or bite, then put it back up or face being maced and thrown into the hole. Advocates say January 6th defendant Brian Mock was thrown into the hole for months after a similar mask and mace incident in the Gulag this past Veteran’s day, the report explained.

The Pundit report added, "Prisoners like McAbee continue to be the unlucky fall guys that the government destroys in their diabolical quest to keep President Trump from re-taking power in 2024. According to his fellow prisoners, McAbee is a kind soul with a big heart that goes out of his way to help others in harm’s way- like fellow protester Rosanne Boyland."

The report said McAbee could be supported by those concerned through this link.

And the report suggested concerned Americans call the U.S. Marshal's Service at 703-740-8132 to protest.