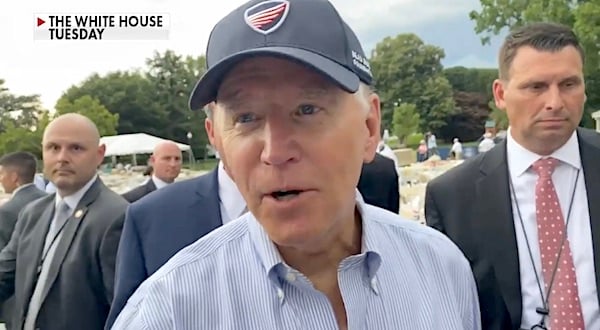 Joe Biden keeps insisting that the nation's southern border is just fine, secure as it needs to be and of course any problems that are there are because of President Donald Trump.

He delivers basically the same message about inflation, which already this year has approached double digits and is hurting low- and middle-income families on a daily basis as they cope with extreme energy and grocery costs that are at levels not seen for decades.

Biden's stand-ins, the vice president and others, are handing out the same information.

And that, according to Charles Lipson, the Peter B. Ritzma Professor of Political Science Emeritus at the University of Chicago, is bringing Biden close to being a copy of the famed Baghdad Bob propagandist for Saddam Hussein.

It is in a commentary at Real Clear Wire that Lipson explains, "The Biden administration keeps telling the public 'All's well. Nothing to see here.' The public isn’t buying it. They can see with their own eyes that it isn’t true. And they’re beginning to wonder if Biden is morphing into Baghdad Bob."

Lipson pointed out that Kamala Harris just days ago insisted on television that, "The border is secure."

She was contradicted almost immediately by actual illegal aliens delivered to her neighborhood in Washington, D.C., who said, in fact, the border is wide open.

Lipson charged that the Harris' statement was not just false, "It is painfully, obviously false. A competent news program would have immediately confronted her with the numbers, particularly the astonishing 2 million expected to cross illegally this year. They didn’t. Nor is Harris alone in repeating that fairy tale. Her colleagues, including Secretary of Homeland Security Alexandro Mayorkas, blow the same smoke. Surely Harris and Mayorkas know the numbers. Surely, they know they are lying. Deceit this blatant seldom works in democracies…"

He said some Americans might be fooled by the lies about illegal immigration, as they're not all at the border. But he said it's harder to fool them about the crippling effects of Americans of inflation.

"They can see it for themselves. A month ago, President Biden said at a press conference, 'Our economy had zero percent inflation in the month of July [2022]. Zero percent.' Those were prepared remarks, and they were flatly false. The real story is that inflation, which reached a 40-year record in June, remained at the same high level in July. It’s unclear whether Biden was trying to hoodwink voters or simply doesn’t understand the difference between high inflation and rising inflation. Neither is a happy prospect."

That was going on even as the government announced the latest punishing inflation figure: 8.3%.

Lipson wrote, "Investors reacted by dumping stocks, anticipating the Federal Reserve would continue to raise interest rates to choke off inflation before it became firmly embedded. Higher rates may lessen inflation, but they also mean higher unemployment, lower corporate profits, and a greater chance of continuing recession. They also mean a tighter squeeze for families. Polls show those families are very worried about their prospects and consider the economy their number one voting issue this November," he said.

He said the out-of-line claims by the Biden administration recall the efforts of "Baghdad Bob," the "feckless pitchman" for Saddam Hussein.

"The country’s information minister (real name: Muhammad Saeed al-Sahhaf) made frequent television appearances, repeating the mantra that everything was going according to plan. His most memorable appearance came amidst the rubble of his capital city, where he continued to spew delusional nonsense."

He said in democracies, where there are some freedoms of speech, "such deceit is much harder to pull off."

But it can happen, as with the damaging information from Hunter Biden's infamous laptop, where "major social media companies suppressed the story or blocked it entirely." He pointed out we now know the FBI asked social media to suppress that information.

Those "lies and suppression" actually helped Biden win, he said.

"Since this deceit worked in the election, why not keep it up? That seems to be the White House’s P.R. strategy to deal with soaring inflation and record numbers of illegal immigrants," he said.