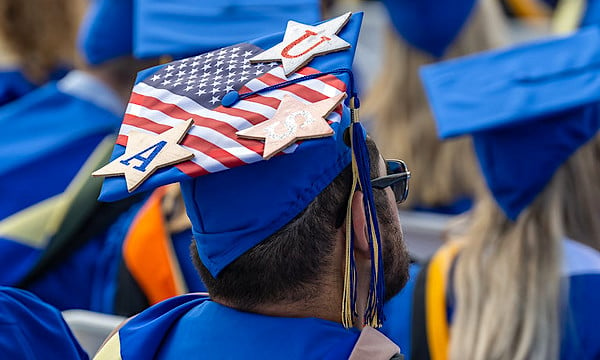 Joe Biden delivers the commencement address at his alma mater, the University of Delaware, for the Class of 2022 at Delaware Stadium in Newark, Delaware, Saturday, May 28, 2022. (Official White House photo by Adam Schultz)

Joe Biden's administration now is going to end up in court over his scheme to have taxpayers pay down billions of dollars in student loans.

Officials with the Pacific Legal Foundation say they have filed a legal action against the U.S. Department of Education to block the "illegal move to cancel more than $500 billion in student load debt."

The agenda was announced a short while back by Biden. He wants to pay off $10,000 in debt for each student loan borrower, and up to $20,000 for some classifications of borrowers.

The estimates on the costs of the program have ranged up to $1 trillion, and the Congressional Budget Office estimated the tab at $400 billion, many times Biden's own estimate.

Biden's administration even has begun recommending students who paid off, or paid down, their loans during COVID to ask for those payments back, so that their indebtedness could be added to the bill that taxpayers, mothers, truck drivers, teachers, and fast-food workers, would have to pay off.

"Congress did not authorize the executive branch to unilaterally cancel student debt," said Caleb Kruckenberg, an attorney at Pacific Legal Foundation. "It's flagrantly illegal for the executive branch to create a $500 billion program by press release, and without statutory authority or even the basic notice and comment procedure for new regulations."

Biden's problems may be furthered by his own statements. He recently declared that the COVID-19 pandemic emergency is over. But the law on which he's relying to purportedly transfer the debts applies only during national emergencies, leaving his authority to take such action in doubt even by his own argument.

That is the HEROES Act, "which was intended as aid to veterans and their families, allows government to modify student loans during times of war or national emergency," the foundation explained.

"Whatever the motives of the president for transferring massive amounts of student debt to taxpayers in a rushed, haphazard manner, it certainly seems like an election year ploy. That is one of the predictable effects of the president usurping Congress’ power to make law," it said.

"Cancelling student debt is unjust to those who have paid their loans or never took any. It will only lead to more calls for government intervention in education at taxpayers’ expense," said Steve Simpson, senior attorney at Pacific Legal Foundation. "Loan cancellation will make Americans more divided, as those who paid their loans—or never went to college—will have good reason to think that we no longer have a government of, by, and for the people."

Plaintiff Frank Garrison is a public interest attorney — now at Pacific Legal Foundation — who believes the rule of law and separation of powers are bulwarks for liberty and against centralized government power.

The foundation said, "As a part of an existing, congressionally authorized Public Service Loan Forgiveness (PSLF) program, he will receive debt forgiveness after making 10 years of payments on his loans. The challenged program will stick him with a new state tax bill which he would not have under his existing PSLF program."

The case is Garrison v. U.S. Department of Education, filed in U.S. District Court for the Southern District of Indiana.

The case simply explains the massive consumption of taxpayer cash was not approved by Congress and thus is illegal.

"Nothing about loan cancellation is lawful or appropriate. In an end-run around Congress, the administration threatens to enact a profound and transformational policy that will have untold economic impacts. The administration’s lawless action should be stopped immediately,” the lawsuit states.