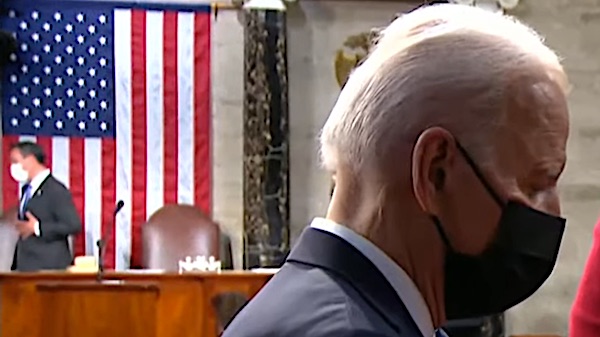 Joe Biden in the moments after his address to Congress on Wednesday, April 28, 2021. (Video screenshot)

A Delaware court ordered the University of Delaware Aug. 23 to provide clarity on its move to keep President Joe Biden’s Senate records hidden. It’s the latest development in the Daily Caller News Foundation and Judicial Watch’s lawsuit to make the records public.

The DCNF and Judicial Watch objected on July 27 to the university’s reasoning to not release the records. Now, the Delaware Superior Court is demanding the university provide further information justifying its move to keep the records out of the public eye.

“After all the lectures from the Biden administration on democracy and the rule of law it’s amazing that the President has a secret deal in place to hide his records from the public,” said DCNF Chairman Neil Patel. “We are happy that the court is pushing the University of Delaware to stop playing games and come clean.”

The DCNF and Judicial Watch filed a Freedom of Information Act (FOIA) lawsuit in July 2020 to obtain the records — which are housed in the University of Delaware’s library. The lawsuit came after the university denied both groups’ earlier attempts to FOIA the Biden records.

In 2012, Biden donated over 1,850 boxes and 415 gigabytes of digital records from his 36-year senate career to the university. The records are said to contain draft legislation, correspondence and committee reports.

Initially, the university claimed the records would be made “available to the public two years after Biden’s last day in elected public office.” But just hours before Biden unveiled his presidential bid in April 2019, the university changed the agreement to note the records won’t be public until he “retires from public life.”

In March, the university also said no public dollars have been used in its “matters or undertakings” regarding Biden’s senate records, and they claimed the records are not subject to public disclosure requirements.

“What is Biden hiding? Is there classified information in his Senate materials? Joe Biden has a secret deal to hide his Senate records with the University of Delaware — and a court wants more answers,” said Judicial Watch President Tom Fitton. “Of course, President Biden could help by simply releasing all his Senate records.”

The records sought by both the DCNF and Judicial Watch may contain information related to Tara Reade — who in 1993, while working in Biden’s senate office, accused him of sexually assaulting her. A copy of the complaint she filed on the matter and related documents to the alleged incident may also be included in the records, Reade has said.

In addition, the records could contain critical information related to Hunter Biden — the president’s son who is under federal investigation for his alleged tax and foreign lobbying violations and alleged involvement in a 2018 gun incident.

The University of Delaware declined the DCNF’s request for comment. The university was given an 30-day deadline to respond to the court.

The Superior Court of Delaware did not respond to a request for comment.

Content created by The Daily Caller News Foundation is available without charge to any eligible news publisher that can provide a large audience. For licensing opportunities of our original content, please contact licens[email protected]