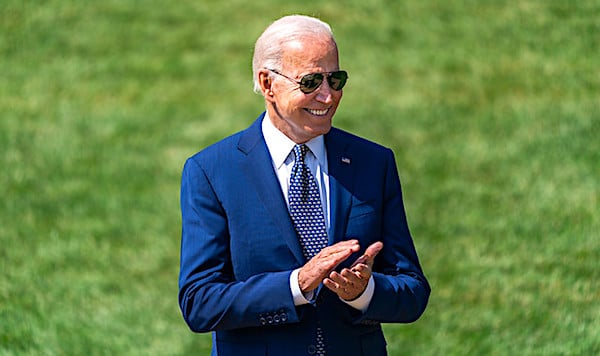 President Joe Biden struggled to find words to describe Republican Sen. Rob Portman during a Friday speech celebrating the start of construction for a computer chip factory in Ohio.

“I’m trying to find the words for him, but he’s a good man. Thank you. You’re leaving a hell of a legacy as you leave what you’re doing as a consequence of you in large part,” Biden said to retiring Republican Sen. Rob Portman of Ohio at the ground-breaking ceremony of an Intel factory. Biden also apparently flubbed the name of Republican Rep. Troy Balderson, mistakenly calling him “Tony,” according to the transcript.

Republican Gov. Mike DeWine of Ohio and Democratic Sen. Sherrod Brown of Ohio also attended the event, according to the Columbus Dispatch, as did Intel CEO Pat Gelsinger. Biden used the speech to celebrate passage of the CHIPS Act.

Biden had another apparent flub in the speech, according to the transcript.

“The United States of America, we used to rank number one in the world in research and development; now we rank number nine,” Biden said. “China was number eight a decade ago; now China is number two.”

The president stumbled over words in prior addresses. Biden mixed up the Democratic candidates for governor and United States Senate, Lt. Gov. John Fetterman and Pennsylvania Attorney General Josh Shapiro, during an Aug. 30 speech in which he attacked “MAGA Republicans” and called for a ban on so-called “assault weapons.”

Congress passed the CHIPS and Science Act into law in July, authorizing up to $252 billion in grants for research and subsidies for domestic computer chip manufacturers. Republicans opposed the legislation after Democratic Sen. Joe Manchin announced his support for the Inflation Reduction Act.