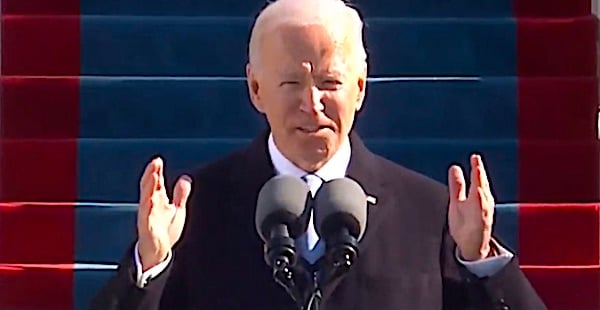 Joe Biden, in his inaugural address, talked about "unity" over and over.

But it must rank among his biggest lies, as a plurality of Americans reveal in a new poll that he has divided the nation, not brought it together.

Pollster Jonathan Zogby earlier confirmed that women, Hispanics and younger voters were abandoning him in droves. And a new poll found the same results.

The polling said there are, in fact, areas of the country, such as the South, the West and the Great Lakes, where a plain majority of respondents said Biden has been the Great Divider.

Other age groups also had majorities that said he's utterly failed to unite the nation.

He has, after all, created inflation nearing double digits, triggered an explosion in interest rates that is hurting many, caused the price of gasoline to rise to nearly $6 a gallon in places, triggered a crisis at the southern border, ordered a disastrous pullout from Afghanistan, leaving the Taliban running the nation, constantly attacked conservatives families and Christians, even calling them "semi-fascist."

Hispanics aligned with most other groups, with 46% saying Biden's dividing the country, whites joined with 53% and only African Americans tilted toward uniting.

The poll said, "Over the last six months we have seen in our polling evidence Biden is losing steam with major parts of his base, specifically: younger voters aged 18-29, women (both suburban and urban) and Hispanics. To make things worse his numbers are also down with college educated voters."

Bedard explained, "It’s the crumbling of his base that Zogby has charted and found in his unity survey."

He added, "Zogby said that to help his case, Biden will have to step up his agenda to score well in the 2022 election and fend off potential challengers, such as California Gov. Gavin Newsom."