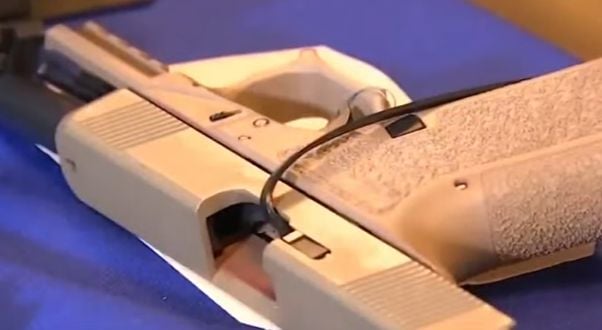 As part of the Biden administration's fight to undermine the Second Amendment, a new rule recently was imposed on gun retailers.

That was that if a gun store would package an unfinished frame, a jig, drill bits, and other parts into a single box and ship it to a buyer, that would "constitute a firearm," require a serial number and have the buyer do a background check.

Those packages previously had been routine, as federal law already required those actions if any sale included an item that was more than 80% manufactured, a demarcation at which federal regulators call it a gun.

Thousands of people wanting to build their own weapon simply ordered the packages and completed them at home.

However, those so-called "ghost guns" were targeted by Biden in an executive order and as of August 24, a new federal regulation required that selling those components as a kit – in one package – makes it a gun.

But a new report from Max McGuire, author of "The Conservative’s Guide to Winning Every Gun Control Argument," at The Federalist pointed out the ban lasted less than a minute.

"As soon as the clock struck midnight and Biden’s new rule went into effect, retailers had already adjusted their inventory to comply with the new regulations. Biden’s ban on 'ghost guns' lasted no longer than a minute," he reported.

He explained the rules allow buyers to purchase the frame, jig, bits and such separately, without being required to do a background check.

Having a seller package and ship those items "in separate boxes" would mean the packages "would not legally count as a firearm."

"It is easy to predict what sellers did the minute the clock struck midnight on August 24, 2022, and the ATF’s final rule banned these kits: The retailers broke up their kits and began selling the unfinished frames, jigs, drill bits, and parts as separate items. Retailers started requiring buyers to purchase all four of these items in separate orders. Some online retailers refused to sell all four items, instead forcing buyers to make separate purchases from different sellers so that no single seller could be accused of selling a 'gun,'" he reported.

"By 12:01 a.m., every item offered in these kits was again available for sale separately online. In less than a minute, the firearm industry had already devised a way to comply with the new regulation and continue to sell these parts. The only difference is that people interested in building their own guns would now need to make multiple purchases and pay to ship multiple packages of parts," he said.

He explained that since the nation's founding, "it has always been legal at the federal level to build a firearm for personal use, as long as the firearm manufactured is otherwise legal to own."

The federal agencies long have held that a piece of metal or plastic, a frame, "becomes a firearm when it is more than 80% of the way toward being finished. Anything less and the object is not legally a gun, allowing businesses to freely sell them without federal firearm laws applying," he explained.

That market has grown in recent years, as the work can be completed with a jig, a drill and other home tools.

He wrote that the law did nothing more than target the law-abiding.

"Politicians and bureaucrats fear homemade firearms because they exist outside of regulated firearm commerce. There is no serial number or background check, so the federal government does not know who owns them. In a dystopian future where government agents could be dispatched to seize Americans’ known or registered firearms, the homemade guns would remain," he said.

"Just as the colonial blacksmiths secretly repaired and built guns for the revolutionary war effort, the ability to manufacture arms today ensures that free Americans will never truly be deprived of the ability to defend themselves."