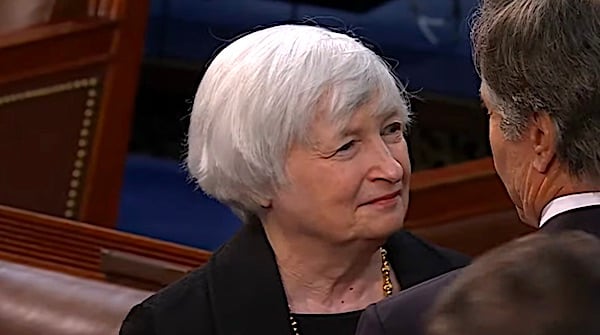 Treasury Secretary Janet Yellen may leave her post following the midterm elections, according to a Tuesday report by Axios.

Though a firm decision has not been made, White House staff are preparing for Yellen’s departure and are already searching for a potential replacement, according to Axios, quoting White House sources. Yellen is the first woman to hold the post and Biden’s first Treasury Secretary, but is reported to be frequently at loggerheads with Biden’s political advisers on economic issues.

Yellen, a former professor of economics at Harvard University and UC Berkeley who previously served as Chair of the Federal Reserve, reportedly pushed back against White House pressure to make public statements she believed were contrary to economic principles. In June, Yellen stated that she “was wrong about the path inflation would take,” and advocated for the Federal Reserve to raise interest rates to combat inflation.

Additionally, she reportedly disagreed with Biden’s decision to cancel a portion of federal student loan debt for borrowers and the administration’s effort to blame corporations for inflation.

Yellen’s departure, however, has not been confirmed, with some in government denying that it will occur. A spokesperson for the Treasury Department told Axios that Yellen “has no plans to leave,” a statement echoed by Biden Senior Advisor Anita Dunn.

Additionally, reports indicate that the Director of the National Economic Council, Brian Deese, will be leaving the administration after November’s midterms. Deese has been Biden’s top economic advisor within the White House and taken a primary role in crafting the administration’s major legislative initiatives, including the American Rescue Plan Act, Inflation Reduction Act and Infrastructure Investment and Jobs Act.

Though Deese has denied that he intends to depart, other officials have confirmed that one of Biden’s cabinet-level economic advisers, Cecilia Rouse, will leave the administration. Rouse, currently the Chair of the Council of Economic Advisors, is on two-year public service leave as a professor of economics at Princeton University, which will expire in 2023.

Rouse’s and Yellen’s replacements will require the Senate’s advice and consent before taking office. Overseeing the search for replacements for such roles are Jeff Zients and Natalie Quillian, who were coordinators of Biden’s COVID-19 Response team, according to Politico.

It is common for senior members of an administration to leave after midterm elections. Though some of Biden’s non-economic advisors, such as Chief Medical Advisor Dr. Anthony Fauci, have announced plans to retire from government service this year, the administration has had a lower turnover rate than all of its six predecessors.

The Daily Caller News Foundation has reached out to the White House for a comment on this story.