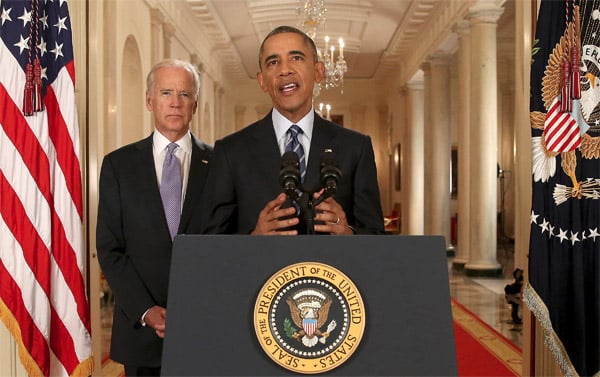 A group of 50 Democratic and Republican House members sent a letter to President Joe Biden Thursday urging the president to reconsider his ongoing pursuit of a nuclear deal with Iran after reports of concessions included in the current draft.

Thirty-four Democrats and 16 Republicans urged Biden to be more transparent with the agreement and any parallel negotiations, and to consult with Congress before committing to any nuclear deal with the state sponsor of terrorism. They raised concerns about several provisions included in the still-secret draft that could make it easier for Iran to skirt sanctions on its terrorist paramilitary group and pose a significant threat to U.S. interests.

“We are deeply concerned about multiple provisions that reportedly may be contained in the final language of any agreement with the world’s leading state sponsor of terrorism,” the representatives, led by Democratic Rep. Josh Gottheimer of New Jersey and Republican Rep. Andrew Garbarino of New York, wrote.

“If the regime in Iran, the world’s leading state sponsor of terror, has proven anything, it’s that it can’t be trusted,” they added.

One provision reportedly allows foreign nationals to do business with non-sanctioned Iranians who themselves transact with members Iran’s Islamic Revolutionary Guard Corps (IRGC), a designated terrorist organization subject to U.S. sanctions. If agreed upon, it could “dilute” the effect of sanctions by creating a “pathway” for Iran to fund the IRGC’s terrorism activities, including known assassination attempts on U.S. leaders, the congressmembers argued.

The Biden administration stood firm on its vow to maintain sanctions on the IRGC, despite Iran’s insistence during a failed round of negotiations in June that removing sanctions would be a necessary precondition for entering the agreement. However, the latest version could anull sanctions on the Central Bank of Iran and the National Iranian Oil Company, something Secretary of State Antony Blinken promised in his confirmation hearing would not happen.

We must not reduce terrorism-related sanctions on the Islamic Revolutionary Guard Corps or allow Russia to have a role in Iran’s nuclear capabilities. We need to address the threat of a nuclear-armed Iran, stand strong against terrorists, and protect American values and allies.

“We urge you not to return to any deal with Iran prior to releasing the full text of the agreement and any side agreements to Congress, to provide us with an in-depth briefing on the matter, and to consult with all key stakeholders,” the letter stated.

Iran presented the EU with a version of the nuclear deal on Thursday, the country’s second revision since the EU offered a “final text” in August and submitted to Iran and the U.S. for review, CNN reported. While U.S. negotiators expressed cautious optimism regarding Iran’s first proposal, the latest text is “not constructive,” a State Department spokesperson said.