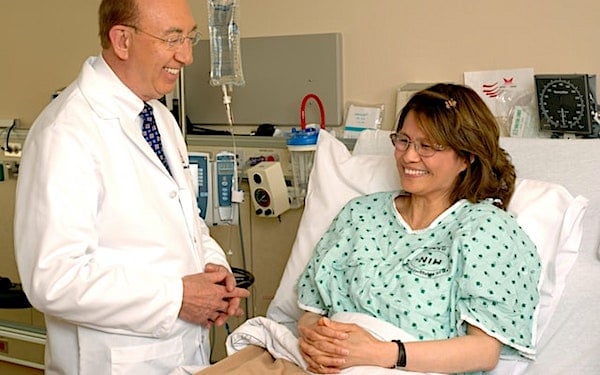 An organization that regulates physicians has agreed that a doctor is allowed to offer to pray with patients, settling a years-long dispute.

A report in Decision Magazine explained it is Dr. Richard Scott, a Christian doctor from Margate, Kent, in southeast England, who had been under attack from the National Health Service in that nation.

He was told he would be barred from the DHS "National Performers List" for one incident where he offered to pray with a patient.

A lawsuit ensued and he was just about to go to a hearing when the NHS agreed to settle.

Scott was put under investigation in 2019 based on an anonymous complaint about him from the National Secular Society, on behalf of a patient.

"In our conversation, I said that personally, I had found having faith in Jesus helped me and could help the patient,” he said. “At no time did the patient indicate that they were offended, or that they wanted to stop the discussion. If that had been the case, I would have immediately ended the conversation."

The General Medical Council shortly later concluded there was no evidence he violated any guidelines.

Then in 2020 the GMC reopened the case, claiming there was "new evidence," but it was forced to announce for a second time that there was no evidence for changing its decision.

Even so, the NHS England continued to pursue a separate investigation and told him to attend a course costing thousands of dollars.

He refused, as the program was intended for doctors who have inappropriately touched patients.

Then officials tried to order him to go through a psychological assessment.

Scott, aided by the Christian Legal Center, was contesting the determination in a hearing scheduled by the Ashford Tribunal Center when NHS abruptly agreed to settle, confirming that he has a right to offer to prayer with patients.

Andrea Williams, CEO of the Christian Legal Centre, said, "It is now a relief to Richard and his family that this case is finally settled. … Secular activists, whether campaign groups or those working within the NHS have been relentless in their pursuit of Dr. Scott. … [He] is a highly experienced NHS doctor whose life and career has been committed to serving his patients and community. … There is no evidence that Dr. Scott’s practice of praying with his patients has in any way interfered with his delivery of excellent medicine—in fact, quite the opposite. He has seen many patients get set from drink and drug addictions and become active members of society through his spiritual care."