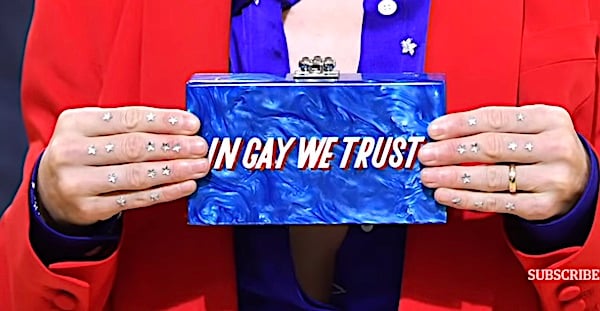 Megan Rapinoe carries a purse reading 'In Gay We Trust' at the Met Gala in New York City on Monday, Sept. 13, 2021. (Video screenshot)

(EPISCOPAL NEWS SERVICE) -- The Church of England is facing sharp criticism from supporters of greater LGBTQ+ inclusion in the church after the daughter of the late-Archbishop Desmond Tutu was barred from presiding at a church funeral in England because she is married to a woman.

The Rev. Mpho Tutu van Furth, who now serves as a priest in the Netherlands, was ordained in the Episcopal Church in 2004. Although the United States-based church has long welcomed gay and lesbian clergy and in 2015 approved marriage rites for use by same-sex couples, the Church of England maintains that marriage is only between a man and a woman and requires gay and lesbian clergy to remain celibate.

The Episcopal Church and Church of England are two independent member provinces of the worldwide Anglican Communion.