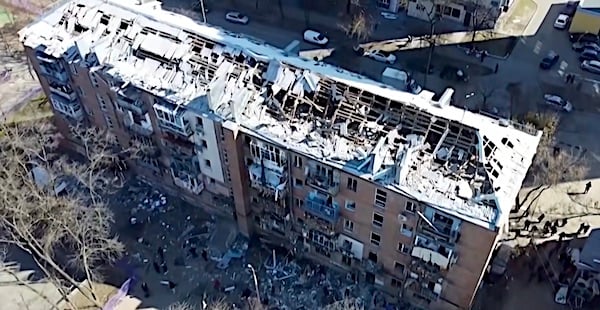 A building in Kiev, Ukraine, is destroyed during the Russian invasion of Ukraine in March 2022. (Video screenshot)

(REUTERS) -- The head of the Russian Orthodox Church has said that Russian soldiers who die in the war against Ukraine will be cleansed of all their sins, days after President Vladimir Putin ordered the country's first mobilisation since World War Two.

Patriarch Kirill is a key Putin ally and backer of the invasion. He has previously criticised those who oppose the war and called on Russians to rally round the Kremlin.

"Many are dying on the fields of internecine warfare," Kirill, 75, said in his first Sunday address since the mobilisation order. "The Church prays that this battle will end as soon as possible, so that as few brothers as possible will kill each other in this fratricidal war."