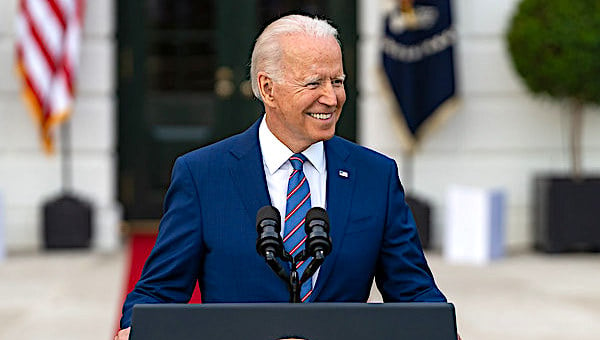 Joe Biden claimed, as reported by the Hill, that he didn't know anything in advance about the FBI raid on President Trump's Mar-a-Lago home in Palm Beach, Florida.

"I didn’t have any advance notice. None. Zero. Not one single bit," Biden told reporters.

This, of course, is from the president who many times has claimed he had no discussions with, nor knew anything about, his son Hunter's international business schemes despite the abundant evidence he routinely met with foreign actors doing business with Hunter, was identified by participants as being in line for a 10% share of at least one major deal, and in fact publicly boasted of using a threat to coerce Ukraine officials into firing a prosecutor looking into corruption at Burisma, which then was paying Hunter a million dollars a year to be on its board.

The Hill said Joe Biden's denial was "significant" because they were his first public comments on the FBI attack on Trump's home.

That report said, "White House officials have stressed that the Justice Department is conducting its investigation free of any political interference."

Only the judge hearing arguments in a court fight triggered by the raid said something else.

In fact, that fight, a request by President Trump for a neutral party to evaluate the documents taken from him for privilege, privacy and other issues, triggered a judge to appoint that third party.

In the ruling making that decision, the judge pointed out that back in May, federal officials told Trump that they would proceed with giving the FBI access "to the records in question."

And that would be, "as requested by the incumbent president."

Trump had sought a neutral arbiter on the documents because of the FBI's long involvement in creating allegations against him that were false. It worked hand-in-glove with Democrat operatives back in 2016 to fabricate the "Russia collusion" claims against Trump.

The FBI pursued those, through a special counsel, for years.

But those claims all eventually were debunked as false.

Now it has raided Trump based on claims he had classified government documents, even though Trump confirmed he'd declassified all the paperwork he had.

In fact, evidence now shows that the FBI raid also confiscated documents from Trump that were privileged attorney-client details, his passports, and even financial records.

A report at the Gateway Pundit charged that the FBI raided Trump's home, and "even ransacked 16-year-old Barron Trump's room and First Lade Melania Trump's closet."

A White House spokeswoman at the time claimed, "The president was not briefed … No one at the WH was given a heads up."

AP's @ZekeJMiller: "The FBI...served a search warrant on the [Trump']s residence...Was [he] or anyone at the WH aware of that...or has [he] been briefed in the aftermath of that...being executed?"

KJP: "No. The President was not briefed...No one at the WH was given a heads up." pic.twitter.com/jbk4jwRQhX

After Judge Aileen Cannon granted President Trump’s request for a special master review of the material confiscated by the Biden DOJ during the raid on his home at Mar-a-Lago, it was revealed that the decision itself affirmed the connection to the White House.

"On pages 2-3 of the ruling Judge Cannon revealed that it was JOE BIDEN who ordered the FBI access to the Mar-a-Lago documents and President Trump’s personal belongings," the report said.

"Joe Biden lied. The White House lied. And now they are caught," the report noted.

At the 100percentfedup blog, a commentary charged, "But it turns out that Biden was not telling the truth, and neither was [spokeswoman Karine] Jean-Pierre. The FBI raid was not independently conducted and was politically motivated. … President Biden lied about knowledge of the raid on former President Trump. The media is pretending like that isn't the real story everyone should care about."