(Image by David Peterson from Pixabay)

Border Patrol agents intercepted 12 men on the FBI’s Terrorist watchlist at the U.S.-Mexico frontier in August, according to new data released by U.S. Customs and Border Protection.

That brought the total number of people on the list apprehended this year at the border to 78, which is triple the figure of the past five fiscal years combined, reported ADN America.

Critics of President Biden's immigration policies point out that many others on the terrorist watch list could be among the more than 500,000 "gotaways" reported by the CBP this fiscal year who crossed the border illegally and disappeared into American communities.

Border agents have encountered 2,150,639 illegal aliens this year, surpassing the 2 million mark for the first time in U.S. history, according to the Department of Homeland Security.

More than 4.9 million illegal aliens have crossed the U.S. border illegally since Biden took office, including an estimated 900,000 "gotaways," according to an analysis of government data by FAIR, the Federation for American Immigration Reform.

From July 2021 to July 2022, there were about 2.4 million illegal border crossings met by U.S. border officials. In contrast, under President Trump's policies, such as Remain in Mexico, there were a little more than 626,000 such crossings from January 2020 to January 2021. 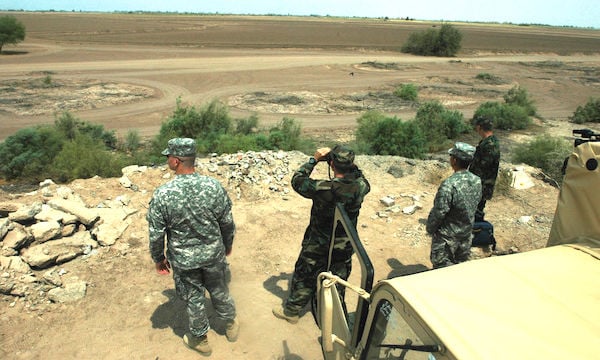 Biden, on his first day in office, eliminated the Remain in Mexico policy – which kept asylum seekers in Mexico as their applications were processed – and suspended deportations. Later, he canceled further construction of the border wall while moving to lift the Title 42 rule allowing immediate deportation of illegal immigrants who recently been in a country where a communicable disease was present.

Last week, as WND reported, days after Kamala Harris declared the southern border is secure, illegal immigrants who were dropped off Thursday at her vice presidential residence at the Naval Observatory insisted otherwise.

Fox News reporter Griff Jenkins asked one of the migrants: "Vice President Harris said that the border is closed. Is the border closed, or do you believe that it's open."

"It's open, not closed," the migrant said. "The border is open."

The man was among more than 100 people from Colombia, Cuba, Guyana, Nicaragua, Panama and Venezuela who were sent to the "sanctuary city" of Washington, D.C., by Texas Gov. Greg Abbott from Del Rio, Texas.

On Sunday, Harris, who has been designated by President Biden as his border czar, told Chuck Todd of NBC's "Meet the Press": "We have a secure border in that that is a priority for any nation, including ours and our administration."

In Jenkins' interview Thursday with a migrant at the Naval Observatory, he asked if all of the migrants believe that the border is open.

"Everybody believes that the border is open," the migrant replied. "It's open, because we enter. We come in, free, no problem."

The Fox reporter clarified: "It's open for you to come illegally, right?

"Yeah, we came illegally. Not legal."

Reporter: “Harris said that the border is closed. Is the border closed?”

Illegal Immigrant: “The border is open…everybody believes that the border is open. It’s open because we enter. We come in, free, no problem…We came illegally.” pic.twitter.com/Ymk2blTcXt

The Democratic-governed city of El Paso, Texas, has been sending its own buses of migrants to New York City. El Paso just approved a contract of up to $2 million for 16 months to bus even more migrants out of town, he said, noting the city is requesting federal reimbursement.

DeSantis, charging Biden "hasn't lifted a finger" to address the border crisis, said Thursday that Florida is not a "sanctuary state," and it's better for the illegal migrants to go to a "sanctuary jurisdiction."

"And, yes, we will help facilitate that transport for you, to be able to go to greener pastures," he said.

The governor recalled Biden's campaign to transport illegal migrants by air "in the middle of the night" and "dump them all across this country."

"There was no warning on any of this," he said.

"And all those people in Washington, D.C., and New York were beating their chests when Trump was president, saying they were so proud to be sanctuary jurisdictions, saying how bad it was to have a secure border, " he said.

"The minute even a small fraction of what those border towns deal with every day is brought to their front door, they all of a sudden go berserk, and they're so upset that this is happening.

"And it just goes to show you that their virtue signaling is a fraud."