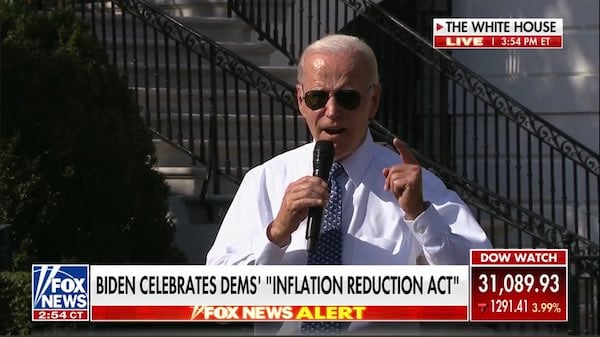 President Biden celebrates his Inflation Reduction Act on the South Lawn of the White House on Tuesday, Sept. 13, 2022. (Video screenshot)

President Biden's celebration of his Inflation Reduction Act while the Dow was suffering its worst day since June 2020 was too much even for establishment media.

As CNN pulled away from the live coverage Tuesday, host Alyson Camerota said "there's this unfortunate split-screen right now with the Dow taking a total beating down more than twelve-hundred points and feels like it's hard to be celebratory for some people."

"Yeah, this is the day on which the White House celebrates the Inflation Reduction Act and a new report shows that inflation is especially high and what we are seeing on Wall Street is a reaction to that anticipating what's coming from the fed," he said.

MSNBC, meanwhile, shifted to talking about investigations of former President Trump when it pulled away from Biden's celebration on the South Lawn of the White House.

While the annual rate of inflation decreased slightly in August to to 8.3%, the core Consumer Price Index – a key measure of long-term trends – rose to 6.3%, which was larger than expected.

"We're making progress," Biden said, "We're getting other prices down as well. We have more to do. We're getting there."

Are Biden and the Democrats completely out of touch with Americans concerning inflation?
100% (88 Votes)
0% (0 Votes)

Bloomberg headlined an article "Biden Celebration of Economy Skips Inflation That Haunts It."

CNN.com said inflation "may be slowing, but food prices are still through the roof."

According to Labor Department data, food costs spiked 11.4% over last year. That's the largest annual increase since May 1979.

A CBS News report said the Inflation Reduction Act "does nothing to address short-term price hikes."

CBS admits the Democrats’ Bidenflation Scam “DOES NOTHING” to stop food, electricity, and rent prices from crushing Americans. pic.twitter.com/balUXz4xj2

The nonpartisan Congressional Budget Office concluded the Biden bill won't have much of an effect on prices this year and could worsen inflation next year.

Biden has boasted that the bill will lower inflation by bringing in $238 billion to reduce the deficit. But after passage of the bill, Biden announced a plan to shift up to $20,000 in individual student loan debt to taxpayers, which will erase any savings, according to an analysis by the Committee for a Responsible Federal Budget.

Reduce inflation by buying solar panels
In the White House briefing room prior to Biden's celebration Tuesday, press secretary Karine Jean-Pierre was asked "What exactly would the Inflation Reduction Act do to reduce inflation in the short term?"

"So I, I, when you look at the lowering costs, in particular, for Americans, I think that's important when you think about how inflation has, has increased cost for American, Americans," she began.

Jean-Pierre went on to mention "saving $100 per year on premiums" with the Affordable Care Act, capping drug costs for seniors at $2,000 and the "$300 billion" to lower the deficit.

The reporter followed up: "But some of the savings that you're pointing to wouldn't kick in until 2024 or 2026. So is it fair to suggest to people that somehow they’re going to see some inflation reduction right now while they’re hurting the most?"

"Well, that, that is actually not true. So, just, this is, just for some folks who are watching: Consumers, families and small businesses owners can head to CleanEnergy.gov — as it relates to the energy cost component, the lowering of cost — to learn more about how they can start saving money immediately."

She then pointed to savings on taxes.

The credits and rebates available through the bill, she said, include a 30% tax credit to cover the cost of installing rooftop solar panels and 10% to cover the cost of installation, materials and other improvements to energy efficiency. There's $300 tax credit for purchasing efficient heating and cooling equipment, and up to $7,500 for purchasing a new electric vehicle.

NOW - Pelosi: "Mr. President ... your extraordinary leadership has made this glorious day possible. I — That's an applause line."pic.twitter.com/srZXtf0MZC