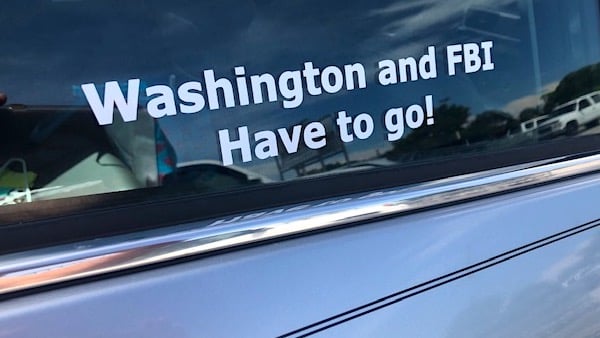 More and more of those who have served with the FBI and are experts on its operations are revealing the deep anguish they feel because of the politicization of the federal bureau.

It famously colluded with Democrats during the 2016 presidential race to fabricate the "Russiagate" allegations against President Trump, which now are considered debunked.

In fact, some of the FBI agents at the time discussed among themselves how they would make sure Trump did not win that election. Eventually some of those agents used disinformation obtained from a Russian man and paid for by the Hillary Clinton campaign as evidence, even though it was false, in court to obtain permission to spy on Trump's campaign.

WND recently reported on an FBI whistleblower who charged that the bureaucracy had moved into the territory of manipulating claims about the Jan. 6, 2021, riot at the U.S. Capitol – or at least falsifying statements. All to target those who supported President Trump.

"There are active criminal investigations of J6 subjects in which I am listed as the 'Case Agent,' but have not done any investigative work," Special Agent Stephen M. Friend, a Florida-based agent and SWAT team member, has written in a whistleblower complaint.

"Additionally, my supervisor has not approved any paperwork within the file. J6 Task Force members are serving as Affiants on search and arrest warrant affidavits for subjects whom I have never investigated or even interviewed but am listed as a Case Agent."

Just the News reported it had reviewed a copy of the complaint submitted by the whistleblower to the Office of Special Counsel.

It included claims the bureau and DOJ are violating the constitutional rights of Jan. 6 case defendants, falsifying statistics on domestic extremism and misusing SWAT teams to make misdemeanor arrests.

She said the "heartfelt messages … show a deep and widespread anguish about the politicization of the FBI."

"It's time to stop the FBI from being the enforcer of a political party's ideology," stated Ernie Tibaldi, a retired agent from San Francisco. "We need to re-establish the FBI as the apolitical and independent law enforcement entity that it always was."

He said he was grateful to Friend "for having the courage to stand up to the corruption that has taken over the leadership of the FBI."

Those speaking out, Devine reported, "hailed Friend, a SWAT team member in Florida, as a 'hero' after he was punished for refusing to participate in what he regarded as unnecessarily heavy-handed SWAT raids over Jan. 6 misdemeanors."

Devine explained that Terry Turchie, former deputy assistant director of the FBI's Counterterrorism Division, said Friend was an "example of what FBI agents nationwide should be."

"Moral courage, leadership in the face of pressure, and true to the Oath of Office FBI agents take to defend the United States Constitution and protect America and its citizens."

Friend had documented how he had maintained an "exemplary" work record and even won awards – but then abruptly was suspended in recent days after raising concerns about the conduct of the FBI and DOJ in its attacks on those who were at the Capitol that day, when a few hundred people rioted.

"I believed the investigations were inconsistent with FBI procedure and resulted in the violation of citizens' Sixth and Eighth Amendment rights," he charged. "I added that many of my colleagues expressed similar concerns to me but had not vocalized their objections to FBI Executive Management."

He said a big problem was that SWAT teams were being sent out to make arrests for alleged misdemeanors, contrary to law enforcement standards.

"I responded that it was inappropriate to use an FBI SWAT team to arrest a subject for misdemeanor offenses and opined that the subject would likely face extended detainment and biased jury pools in Washington D.C.," Just the News reported Friend wrote.

"I suggested alternatives such as the issuance of a court summons or utilizing surveillance groups to determine an optimal, safe time for a local sheriff deputy to contact the subjects and advise them about the existence of the arrest warrant."

But he said his bosses confirmed "FBI executive management considered all potential alternatives and determined the SWAT takedown was the appropriate course of action."

He also expressed concern that the DOJ was overcharging in those cases, and biased jury pools in Washington were a problem.

Devine reported, "Turchie, who led the Unabomber task force, says he didn’t even use a SWAT team in 1996 to arrest Theodore Kaczynski, a violent domestic terrorist who had killed three people and injured 23 others."

In fact, Turchie said, "No real FBI agent would defend the position of using SWAT teams to arrest non-violent senior citizens and others with political opinions not currently tolerated by this administration, compounded by the idea that many of these cases involve misdemeanor criminal charges. This activity actually generates tension in communities and increases the potential for tragic results and injuries to FBI agents and citizens."

"I was involved in numerous arrests where we never used any SWAT teams," says retired Special Agent David Baldovin, who served from 1969 to 2000, including 25 years in SWAT.

"The current use — or should I say abuse — of bureau SWAT teams has been outrageous."

Retired Special Agent Bob Fricke, who served from 1987 to 2008, said that the use of SWAT tactics "on elderly" makes him sick. "It has to be purely political …"