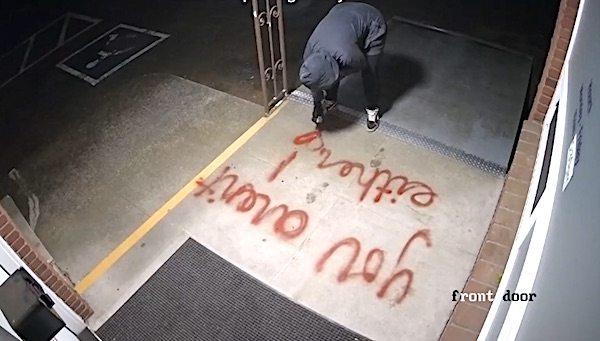 A crisis-pregnancy center in Washington state gets vandalized with the message, 'If abortions aren’t safe, you aren’t either,' on Wednesday, May 25, 2022. (Video screenshot)

The Justice Department (DOJ) announced Monday that a man pled guilty to vandalizing a Planned Parenthood clinic, despite reportedly going months without arresting anyone responsible for a number of attacks on crisis pregnancy centers since May.

“Citizens have a legal right to peacefully protest, but Mr. Kruse’s actions of repeated violence toward a Planned Parenthood clinic crossed a line,” said FBI Special Agent in Charge Kieran L. Ramsey said, according to the press release. “The FBI will continue to work with our federal, state and local law enforcement partners to ensure the safety of our communities while respecting individuals’ First Amendment rights.”

However, as of Sept. 14, the DOJ has so far failed to make any arrests in numerous attacks on crisis pregnancy centers since the Supreme Court’s draft opinion calling for Roe v. Wade’s reversal became public.

The Jane’s Revenge pro-abortion group took credit for vandalizing or setting fire to the facilities of faith-based groups including crisis pregnancy centers on more than 15 occasions between the draft’s May 2 leak and Sept. 14, Fox News reported. None of the attacks had led to an arrest by then.

I condemn violence of any sort, but it’s mildly infuriating the DOJ is sending out press releases about arresting someone for breaking windows at a Planned Parenthood clinic—but there’s been no real progress on the rash of attacks on crisis pregnancy centers. pic.twitter.com/Jcnp1yoOFU

One late June attack left a Washington D.C. pregnancy center smeared with red paint and eggs, while organizations in Wisconsin and Oregon have reportedly been attacked with Molotov cocktails, according to the Catholic News Agency. A Washington state pregnancy center was spray-painted with “Jane’s revenge” and the words, “If abortions aren’t safe, you aren’t either,” according to KTTH radio host Jason Rantz.

NEW: Next Step Pregnancy Center in Lynnwood, Wash. was vandalized by a criminal dressed in all black. She tagged the property with the threat “If abortion isn’t safe, you aren’t either” and “Jane’s revenge.” pic.twitter.com/pjM2TLMZVK

The FBI told Fox News in June it had begun investigating the crisis pregnancy center attacks, informing the outlet on Sept. 7 that investigation was ongoing without explicitly naming Jane’s Revenge.

The FBI did not immediately respond to the Daily Caller News Foundation’s requests for comment.