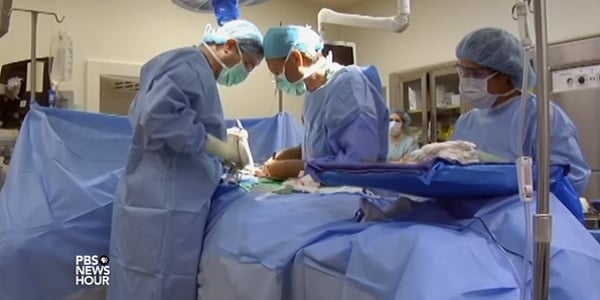 American doctors go to great lengths to maintain the highest ethical standards as they work to save thousands of desperately ill patients waiting for an organ match, as underscored in recent reporting of innovative transplant experiments using genetically modified pig hearts. China’s transplant sector, unconstrained by rigorous ethical rules, found a more expedient solution. China created a thriving transplant industry, the world’s second largest, based on a supply of organs forcibly harvested from executed prisoners – most likely prisoners of conscience.

Though China announced that it banned this hideous practice in 2015, transparency is lacking and mounting evidence indicates that it continues. Nevertheless, the American transplant sector, while adhering to medical ethics at home, openly supports China’s transplant doctors and industry.

In 2006, shocking reports first surfaced of China forcibly harvesting organs from detained Falun Gong adherents. According to these reports, after Falun Gong, a Chinese spiritual meditation group, was targeted for “elimination” by China’s president in 1999, thousands of practitioners were thrown into labor camps and jails and subjected to organ screening, unexplained deaths, and disappearances. Many, the group says, were killed for their organs, which were sold to China’s transplant sector, just as it surged and became a billion-dollar industry. Credible testimony from former detainees, relatives, patients, and surgeons supports this. It was during this period that scores of Chinese transplant surgeons published articles, openly describing procedures on prisoners who “were alive and breathing as the surgeons cut their hearts out,” as documented in a 2022 article in the respected American Journal of Transplantation, written by Victims of Communism Foundation fellow Matthew Robertson and Israeli Dr. Jacob Lavee.

Last year 12 independent UN experts stated they were “extremely alarmed” by “credible information” that forced organ harvesting was continuing and, moreover, targeting China’s various religious minorities. Several sources report evidence that the atrocity has spread to Xinjiang’s massive network of closed detention camps, which, significantly, were built after 2015, and which both Republican and Democratic administrations recognized as the site of ongoing genocide against China’s Uyghur Muslims.

Nury Turkel, who chairs the U.S. Commission on International Religious Freedom, documented forced blood sampling and organ screening of Uyghur detainees, including a Christian, Ovalbek Turdakun, whom one of us interviewed. As noted in a May 2022 European Parliament resolution, a Beijing hospital brazenly advertised its use of “‘halal organs’ from Uyghurs and Muslim minorities.” At the International Religious Freedom Summit, held in Washington, D.C. in June, Ethan Gutmann, the leading field researcher on China’s forced organ harvesting, estimated that 25,000 to 50,000 Uyghurs have been killed annually for their organs. Gutmann’s research implicates a former SARS hospital in Aksu, Xinjiang, which is served by an airport with a designated “fast lane” for expressing organs to hospitals throughout China.

No satisfactory explanation exists for how – despite only a million registered volunteer donors in China, compared with America’s 145 million in 2019 – China’s patients can schedule appointments for transplant surgeries within days or weeks, as patients and investigators reported, instead of waiting months or years, as in the U.S. In addition, Robertson, Lavee, and Australian statistician Raymond Hinde have determined that the growth curves of China’s voluntary donation lists for three organ types formed implausible, nearly perfect quadratic equations. In a peer-reviewed medical ethics journal article in 2019, they conclude that China’s donor database was “falsified” as a result of being “manufactured and manipulated from the central levels of the Chinese medical bureaucracy.” Also, China’s reported number of annual transplants, 5,000-6,000, appears understated. Documenting Chinese transplant hospitals, beds and surgeons, Gutmann and Canadian human rights experts David Mattas and David Kilgour estimated that 60,000 to 100,000 organ transplants are occurring annually in China, with 8,000 a year at just one hospital.

Though shocking, China’s lack of medical ethics is not entirely surprising considering that it perpetrates ethno-religious genocide. But, given the grave questions about organ sourcing raised in these reports and China’s lack of transparency, it is unconscionable that major American universities and hospitals support China’s transplant sector. As brandished on their websites, Harvard, Stanford, the University of Pittsburgh, and many other others provide China with fellowships, academic exchanges, conferences, and joint research projects. American institutions are documented to have trained 344 of China’s transplant doctors.

Some in the American medical community apparently collaborate in the hope of persuading their Chinese partners to ensure organ donation is indeed voluntary. But when blocked from verifying claims of reform, these same U.S. institutions accept China’s word at face value and even praise its progress. They are not alone in buying China’s lies. The medical ethics journal cited above observed: “The World Health Organization, the Transplantation Society, the Declaration of Istanbul Custodian Group, and the Pontifical Academy of Sciences have all provided endorsements of the reforms based on what appears to be contaminated data.”

The WHO’s organ transplant task force, for example, was proposed in 2017 by Dr. Huang Jiefu, who directed China’s transplant donor registry, long served on the Chinese Communist Party’s Central Committee and, though far from independent, was appointed to the task force itself. Under the chairmanship of Harvard’s Dr. Francis Delmonico, who toured China’s hospitals as Huang’s guest and praised Huang as a “courageous leader” in congressional testimony, the task force was mandated to flag crises in the transplant field. Yet, Gutmann, Robertson, and Mattas each say that it dismissed out of hand their devastating research.

To date, no U.S. administration has taken seriously the charges of China’s ongoing organ harvesting. In 2018, the State Department tried to close the book on the issue, declaring point blank that China’s government “officially ended the long-standing practice of involuntarily harvesting the organs of executed prisoners for use in transplants in January 2015.” It, too, failed to undertake independent verification. The Biden administration should reexamine all forced organ harvesting evidence and make its own determination. Congress should pass the Stop Forced Organ Harvesting Act to ensure this happens.

Former Chinese military surgeon Dr. Enver Tohti, testifying before the Tom Lantos Human Rights Commission, recently commented on Western indifference to this issue. Forced organ harvesting seemed just “too bad to be true,” he said. But the evidence is too compelling to persist in that naïve belief. Until compliance with international ethical norms is verified, the American transplant sector should halt all collaboration with China’s.

Nina Shea is a senior fellow of the Hudson Institute where she directs its Center for Religious Freedom. She is a former vice chair of the U.S. Commission on International Religious Freedom, to which she was appointed by House Republicans.

Katrina Lantos Swett is president of the Lantos Foundation for Human Rights & Justice. She is a human rights professor at Tufts University and the former chair of the U.S. Commission for International Religious Freedom, to which she was appointed by Senate Democrats.