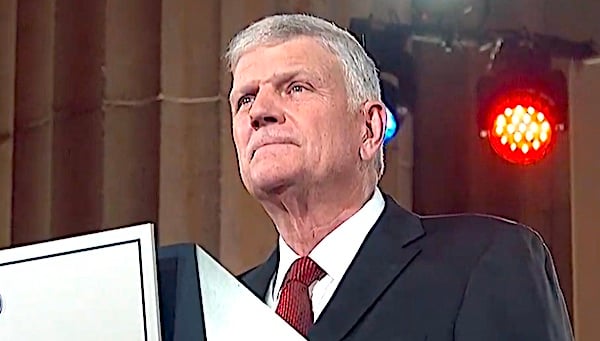 Franklin Graham, the chief of the worldwide Christian ministry Samaritan's Purse, charged Friday that Joe Biden's speech to the nation on Thursday, although not carried by many networks, actually was an attack on "freedom-loving Americans."

Biden, in his partisan speech, lashed out angrily at Republicans who he claimed are trying to undermine democracy.

"Does believing in freedom, justice, opportunity, less taxes, and smaller government make me an extremist? Absolutely not. The ones who are extremists are the ones who want to take that away from us! Ronald Reagan campaigned to Make America Great Again. Does that make him an extremist?

"President Biden is trying to vilify and demean conservative, freedom-loving Americans who do not support the failing and economically unsound policies of his administration. This is just further dividing our nation. Ultimately, America can only have true greatness through God. The blessings of this nation have come from the hand of God. We need to turn to Him. We need His help, His direction, and His healing," Graham wrote

Even leftists in the media offered criticism of Biden's political attack, staged with U.S. Marines in the background behind the president.

CNN anchor Brianna Keilar said Biden's presentation, with the Marines, "flies in the face" of having an apolitical military.

Fox News reported that even "members of the establishment media … appeared shocked by the partisan nature of the primetime address."

"CBS News correspondent Ed O'Keefe similarly wrote, 'Like or loathe what he said tonight, it should be noted: The president spoke tonight on the grounds of a national park, flanked by US Marines, and took direct, specific aim at his predecessor and members of the Republican Party. Another thing we don’t see everyday.'"

And, "CNN correspondent Jeff Zeleny added, 'There’s nothing unusual or wrong with a President delivering a political speech — it’s inherent in the job description — but doing it against a backdrop of two Marines standing at attention and the Marine Band is a break with White House traditions.'"

And that report said, "Others drew attention to the dramatic lighting of his speech, comparing it to the villainous Supreme Leader Snoke from the Star Wars franchise, the 'gates of Hell' and even invoked 'Hades.'"

The Daily Mail documented that popular Fox commentator Tucker Carlson called the speech, in Pennsylvania, as a "turning point in American history."

Tucker monologued,: "'The threat is not coming from barefoot religious extremists in caves. It's not the Chinese government. It's not Vladimir Putin himself. The most evil man in history. No, this threat is worse and home grown. The single gravest threat to America today is Republican voters. All 75 million of them. They are Nazis and destroyers of democracy.' That's the message of Joe Biden's speech.'"

Carlson continued, "What Joe Biden is saying right now is the official position of the entire executive branch of the U.S. Government. That include the justice department and Intel agencies and the world's most powerful standing military. Think about that. Does it make you nervous?"

He warned, "You don't have to be a Trump voter to see a speech like this as a turning point in American history. For hundreds of years the U.S. has had a political system comprised of two competing parties. If you declare one party criminal, what would you be left with? You would be left with a one party state. That's what Joe Biden is calling for tonight. A one party state. It's shocking," he said.

The Daily Mail also characterized Biden speech as "doubling down "on MAGA hate," but pointed out networks "largely ignore[d]" the event with only CNN and MSNBC airing it live.

"It's ironic that @JoeBiden calls MAGA the fascist. History teachers us it's the failing dictators in demise who raid the homes of their political opponents and explicitly divide the citizenry based on race."

Sen. Lindsey Graham, R-S.C., responded, "With all due respect Mr. President, there's nothing wrong with America's soul." He pointed out Biden's damage to the country: "Rampant inflation. Out of control crime. Terrorism on the rise. Broken borders. Stop lecturing & change your policies before it's too late."

Biden called out Trump by name and berated those who support him, the report said.

"Donald Trump and the MAGA Republicans represented extremism that threatens the very foundations of our republic," Biden claimed.

Rep. Marjorie Taylor Greene, R-Ga., perhaps was more blunt than most who reacted, with her "NaziJoe has to go."

Sen. Ron Johnson, R-Wis., was more moderate, but still blunt. "Democrats are in control of all branches of government but they're still out of control angry. What's the problem? Have they not destroyed enough of America yet?"

Gov. Mike Huckabee, a onetime candidate for the GOP nomination for president, wondered, "Is Joe about to announce the round up of all the Trump voters? Pure hate speech if there ever was one. Is it a full moon?"

"Instead of trying to bring our country together to solve the MANY problems he has created, President Biden has chosen to divide, demean, and disparage his fellow Americans—simply because they disagree with his policies," he said. "Mr. President: you owe millions of Americans an apology."