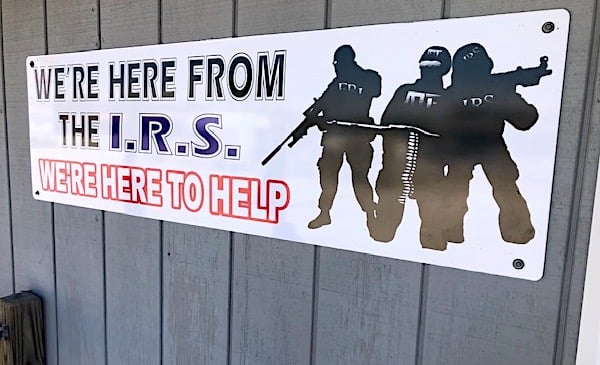 The Republican Party, if it is returned to the majority in Congress in just a few weeks, says it will ax those 87,000 new IRS agents that were authorized in the Democrats' misnamed "Inflation Reduction Act" just weeks ago.

That's just one of the features of the party's Commitment to America" that has been announced by House Minority Leader Kevin McCarthy, Whip Steve Scalise, and Rep. Elise Stefanik.

According to a report from Fox News, the plan features four categories: "An Economy That's Strong;" "A Nation That's Safe;" "A Future That's Built on Freedom;" and "A Government That's Accountable."

"That means you can fill up your tank. You can buy the groceries. You have enough money left over to go to Disneyland and save for a future — that the paychecks grow, they no longer shrink," McCarthy said during his party's announcement.

He said the nation's safety would mean "your community will be protected, your law enforcement will be respected. Your criminals will be prosecuted. We believe in a future that's built on freedom — that your children come first."

Fox explained that Republicans revealed they'd worked on the planning for a year, and some components were a reaction to the damage to the nation from the agenda of the Democrats now in power.

"We watched what they did to our communities, defunding of the police. We've got crime problems from Portland to Philadelphia now, with DAs and prosecutors that looked the other way," McCarthy said.

A report in the Daily Mail said the plans include canceling billions of dollars Biden wants handed over to the IRS to supersize the agency.

That report said the Republicans also plan a series of investigations including into the "weaponization" of the Department of Justice.

That department, including its FBI, colluded with Democrats during the 2016 presidential campaign, using Russian sources and disinformation paid for by the Hillary Clinton campaign, to launch the now-debunked "Russiagate" conspiracy theory against Donald Trump, first as a candidate and then as president.

"Our job is to work for you, not go after you," McCarthy said.

The report explained the 87,000 agents number was from a Treasury Department assessment of how many IRS employees could be hired using the $80 billion appropriation over 10 years.

The GOP also wants to fully fund border enforcement and end Joe Biden's catch-and-release loopholes to address the crisis he created at the southern border, criminalize all forms of illicit fentanyl, support 200,000 more police officers with recruiting bonuses, take action against prosecutors who refuse to prosecute violent crimes and established a select committee on china.

The party also wants to move supply chains away from China by boosting American manufacturing and the use of the nation's own natural resources.

Americans individually have lost tens of thousands of dollars in their retirement accounts, illegal drugs are taking a massive toll on the lives of young people, the crisis at the southern border remains unabated, and more.

The party also wants a parents' bill of rights and something done to address abortion.