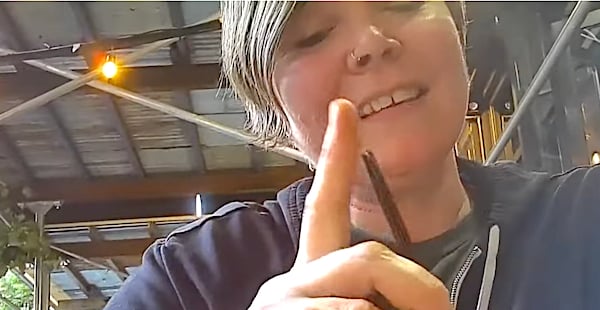 The mama and papa bears at school board meetings who are regarded by the Biden Justice Department as "domestic terrorists" with no legitimate complaints can point to the frank admissions of a school director caught on hidden camera by Project Veritas as the latest evidence that educators are stealthily implementing a left-wing political agenda in classrooms that conflicts with their values.

Jennifer Norris, director of student activities at the private Trinity School on Manhattan's upscale Upper West Side, boasted to a Project Veritas undercover journalist that she feels like a "double agent" who is "sneaking" her political "agenda" into classrooms. And she complained of pushback in class from "white boys" who are "protected by capitalism."

"I just keep trying to disrupt wherever I can. And now that I'm in this position, I have so many opportunities to do that," she said.

Norris said she "can’t pretend I'm [not] promoting an agenda, even though I clearly am with all the stuff I'm doing."

She explained that there are teachers at her school "who want to do these [activist] things, but the administration just wouldn’t let us."

"So, we’ve been just sneaking things in [through] the cracks," Norris said.

When she began working at Trinity – a 209-year-old institution that charges $60,000 a year for tuition – she had to hide who she is.

"I felt like a double agent or something," said Norris.

After the undercover interview at a New York City restaurant, Project Veritas founder James O'Keefe sat down with Norris at her table with a microphone in hand and a cameraman trailing him.

As O'Keefe reiterated some of Norris' disclosures, the stunned educator walked out of the restaurant with O'Keefe in tow, asking her to comment.

The Norris interview is part 2 of a new education series by Project Veritas. Part 1 featured a public elementary school assistant principle in Greenwich, Connecticut, boasting that he avoids hiring conservative and Roman Catholic teachers, focusing instead on those who promote “progressive” political ideas.

"Believe it or not, the open-minded, more progressive teachers are actually more savvy about delivering a Democratic message without really ever having to mention politics," said the assistant principal, Jeremy Borland.

On Wednesday, one day after Project Veritas published the video, the school placed Borland on administrative leave.

'White boys' who are 'protected by capitalism'
In the undercover interview with Norris, the student activities director said Trinity is "definitely a school where conservatives would not feel comfortable," noting there are "white boys who feel very entitled to express their opposite opinions and just push back."

These are students who are "so protected by capitalism," describing them as "just horrible" and "really awful people."

Norris told the undercover PV journalist that she is "in charge" and will not allow Republican perspectives on campus.

"Not on my watch," she declared.

Norris was asked if she would be open to having a man dressed as a woman, a drag queen, be paid by the school to speak to the children.

See the undercover interview with Norris: