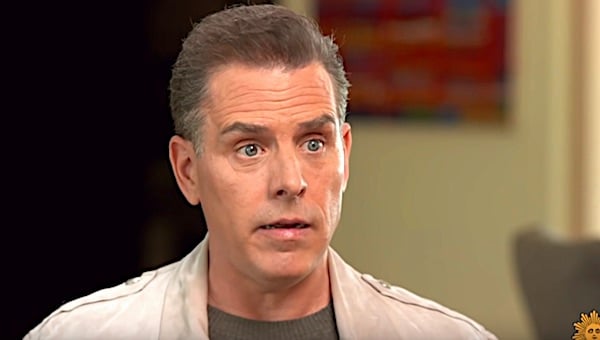 After all, Hunter traveled aboard Air Force Two when his father was vice president and took a trip to China, and came back with a huge business deal.

There's even that reference to the 10% that the "big guy" would be getting, with Hunter's associates identifying that person as Joe Biden.

Now Fox News Digital reports having uncovered emails that reveal Hunter Biden's comment that he would be "happy" to introduce his business associates to a top Chinese Communist Party official to talk about potential deals.

That official, whose name Hunter Biden could not remember, apparently sat at his table during that famous 2013 dinner in Beijing when he traveled with his father, then vice president for Barack Obama.

"The emails underscore the extent to which Hunter was willing to use his political connections to aid his business associates in their pursuit of business in China," the report explained.

Fox reported it was James Bulger, namesake nephew of Boston crime boss James "Whitey" Bulger, who sent Hunter an email on July 22, 2014, asking him to introduce his business partners to Tung Chee-hwa, a billionaire who was vice-chiriman of the Chinese People's Political Consultative Conference that year.

That group cites that it is the "key mechanism for multi-party cooperation and political consultation" under the CCP.

The report detailed: "Bulger, who goes by 'Jimmy,' served as the chairman of Boston-based Thornton Group LLC— a firm that joined forces with Hunter's now-defunct Rosemont Seneca to launch its joint-venture with Chinese investment firm Bohai Capital to create BHR Partners. BHR Partners is controlled by Bank of China Limited. In the 2014 email, Bulger asked Hunter to introduce BHR CEO Jonathan Li and Andy Lu, who was a BHR com0ittee member, to 'Mr. Tung' to discuss 'BHR investment targets' and 'fundraising,' alleging Hunter sat next to Tung at a 2013 dinner welcoming then-Vice President Joe Biden to Beijing. Fox News Digital reached out to the White House multiple times requesting the seating chart for the Beijing dinner, specifically Hunter's table, but they did not respond."

Bulger described how he understood Hunter was traveling with his father, and was seated next to Mr. Tung, and asking for Hunter to send an email to Tung "laying out that your are a partner and Board Member of BHR and that you would be grateful to Mr. Tung if he could meet your local partners..."

Hunter's response was that he'd be "happy" to do that, but he couldn't remember the names of the men he was with at the event, and had no email addresses. He told the "team" to draft an email for his "approval."

There was no indication what eventually happened with the request, and response.

According to Fox News Digital a 2018 government document reveals CPPCC is a "central part" of China's system to neutralize sources of possible opposition and conform them to the CCP, and a 2021 report said it works with "non-Communist Party members" to see them work "with the CCP to advance its interests."

"In 2015, the year following the emails about Tung, emails obtained by the Free Beacon and verified by Fox News Digital show that Hunter and his business partners helped an organization seeking to 'co-opt' state leaders as part of Beijing's sprawling foreign influence operation to find an outlet in the United States while his father was vice president," the report noted.

Another time, when Bulger asked Hunter Biden for a meeting regarding another operation linking U.S. and Chinese interests, Biden responded, "I'll make it work."

Fox News Digital reported there were a multitude of such interactions involving the Biden family.

For 25 years, WND has boldly brought you the news that really matters. If you appreciate our Christian journalists and their uniquely truthful reporting and analysis, please help us by becoming' a WND Insider!