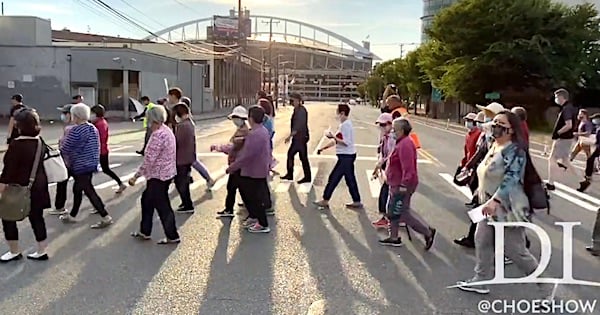 Residents of Seattle’s Chinatown are fighting back against city officials over their plan to build a homeless megaplex in the center of their neighborhood.

The King County Department of Community and Human Services is planning to spend $66.5 million to construct a 24/7 homeless shelter that will house more than 500 people, according to the King County press release. Thousands of Chinatown residents attended a rally Thursday to protest the construction of the homeless shelter.

“The King County Council met on May 3 to approve and vote on the 69 million dollar lease for the 6.9 acres for about five years,” Chinatown Community Watch volunteer Tanya Woo told the Daily Caller News Foundation. “I was watching this meeting, and they’re talking about the importance of having a community outreach engagement plan and also good neighborhood agreements. We haven’t learned any information, no one’s been talking to us. No one’s engaged us. No one has done any community outreach. We find this to be very much evidence of systemic racism.”

The new shelter will replace a current shelter which holds nearly 300 people in November, provide an RV park and a sobering center, King 5 News reported. In total, the new shelter is estimated to cost $22 million to keep open.

The funding for the new shelter will come from the city of Seattle, who will provide $5 million along with funding from President Biden’s American Rescue Plan, the King County press release stated. The homeless shelter will also include 50 tiny house units and require 400 people to man the entire complex.

Residents of the district where the homeless shelter will be built said at the rally that city officials, including director of the King County Department of Community and Human Services Leo Floor, King County Executive Dow Constantine and Seattle city council members, did not receive community input before approving the plans.

Protesters held signs at the event that showed council member’s faces with the caption “not welcome here.” Other signs read, “stop Asian hate” and “it’s racist.”

“It is insane,” Bettie Luke, a Chinatown resident said at the rally. “It is destructive. It will tear apart the safety that the residents here used to feel.”

CHINATOWN FIGHTS BACK: Thursday evening, organizers say more than 1000 people attended PROTEST against @kcexec‘s HOMELESS MEGAPLEX in nearby SODO. #CID residents say elected officials DID NOT consult THEM and STILL trying to RAM this through w/out any public input. #Seattle 🧵👇 pic.twitter.com/S7txVzRrNX

“We’re not saying that the unhoused are the problem,” Woo told the DCNF. “We don’t believe they are, it’s the people who prey on them that are the problem: the drug dealers who come to where their clients are, or the people who run the prostitution rings who are employing the young ladies who are working to try to buy drugs. None of those concerns have been addressed from that center and we have also similar concerns regarding this 500 person shelter. We have questions that we would like addressed and answered.”

King County Republican party chairman Matthew Patrick Thomas attended the really to show his support of the protesters, according to social media posts.

“Our Seattle City Government cannot even handle the rampant crime, drug and homelessness in the city right now as it is and the answer is not to put a homeless facility in this neighborhood without consulting the constituency of this,” Thomas said at the rally.

The King County Department of Community and Human Services did not immediately respond to the DCNF’s request for comment.