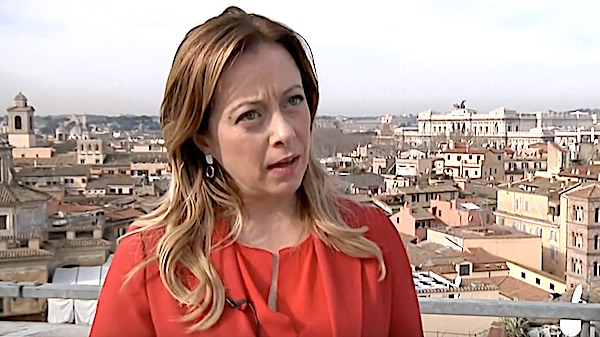 Italy is set to elect a right-wing coalition led by Giorgia Meloni, exit polls showed Sunday after voting for the country’s next prime minister ended.

The major left-leaning coalition, with between 25.5% and 29.5% of the vote, ceded defeat to the Brothers of Italy party and its nationalist allies who collectively obtained up to 45% of the vote, Reuters reported. As prime minister and leading Italy’s most rightward government since WWII, Meloni has said she will seek to cut taxes, expand natural gas infrastructure and regulate immigration, Politico reported.

“If we are called upon to govern this nation, we will do so for all Italians, with the aim of uniting the people, of exalting what unites them rather than what divides them,” Meloni told Reuters early Monday local time as results remained inconclusive. “We will not betray your trust.”

Campaigning on the motto “God, fatherland and family,” Meloni has presented herself as a model of unity and strength after the previous government collapsed amid internal economic turmoil and war not far from Italy’s borders.

Meloni’s coalition hopes “to address the cost of energy and inflation, which are destroying the social and economic fabric of Europe,” Member of Parliament Guido Crosetto, who helped found Brothers of Italy, told Politico.

“There is the budget to approve in a short time, so it’s a very difficult moment, but we are leadership that is up to it,” he added.

Meloni accused the European Union’s energy policy of driving up the cost of living and crippling small businesses during a campaign speech in August, the Associated Press reported. She advocated expanding exploration in the Adriatic Sea instead of seeking foreign alternative suppliers, as her predecessor had.

Her party also intends to implement billions in tax cuts by the end of 2022, starting with a blanket 15% tax rate for individuals with annual incomes up to $99,750, Reuters reported.

In addition, she has also taken a hard stance on immigration, according to multiple reports.

Italy’s Lampedusa island often serves as an initial landing point for refugees fleeing North Africa, placing it at the “forefront” of European immigration, Dan Kochis, a senior analyst at the Heritage Foundation, told the Daily Caller News Foundation. Concerns about migrant crime and assimilation issues have spread throughout Europe’s liberal countries, he explained.

“This argument today has been won by a much more conservative approach,” he said.

Brothers of Italy emerged in 2012 out of an overtly fascist post-WWII party to one focused on mainstream right goals, disavowing its historical support for the Mussolini dictatorship, Politico reported. Meloni’s popularity skyrocketed since 2018, when her party received just 4% of the vote.

“If things go in a difficult direction … we have the tools,” European Commission President Ursula von der Leyen said Friday when reminded that individuals “close to Putin” were on the ballot in Italy’s election at a conference at Princeton, Politico reported. The European Commission has the ability to withhold funding from member countries for alleged violations of rule of law.

Meloni has championed Ukraine and sanctions on Moscow, France24 reported. After lauding Putin for “defending European values and Christian identity” in her 2021 autobiography, she has condemned his brutal invasion.

Hedwig Giusto, a research fellow at the Foundation for European Progressive Studies, has told the DCNF she suspects the change is an electoral strategy to broaden Brothers’ appeal in Italy.

“Brothers of Italy has been the only party to stand against the Draghi government … this has allowed Meloni to get more visibility than she would have otherwise had, and to oppose some of the difficult political decisions taken to fight the Covid-19 pandemic,” said Giusto.

Meloni is set to achieve a winning, if slim, majority in both houses of parliament and within her own coalition, Politico reported. Under Italian election rules, the party of the winning coalition with the most votes nominates a candidate for prime minister.