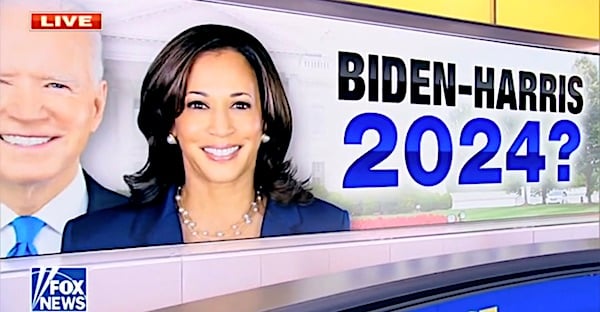 “She needs to go ahead and to keep putting out there for the public and especially potential other opponents that Joe Biden is running, because the longer that people can believe that myth, the greater the opportunity is that no other contender like [Gavin] Newsom or [Pete] Buttigieg or even Hillary Clinton might step into the fray,” said Romero.

Romero, now a professor at Pepperdine University’s School of Public Policy, was reacting to Harris’ remarks on NBC’s “Meet the Press” Sunday about whether she would run again as vice president alongside Biden. Harris said she would “proudly” do so, noting Biden “has been very clear that he intends to run again.”

Biden is reportedly preparing to unveil his 2024 re-election bid on the heels of the congressional midterm elections in November, aides and allies to the president told Bloomberg News in August. White House Press Secretary Karine Jean-Pierre said in July that Biden “intends to run in 2024.”

A USA Today-Ipsos poll released on Aug. 28 found 56% of Democrats do not think Biden should run in 2024. The online poll, which surveyed over 2,300 voters and had a 2.5 plus or minus margin of error, also found 60% of Democrats think Biden could win if he runs.

Romero also reacted to Democratic Ohio Senate candidate and Congressman Tim Ryan’s claim Thursday there should be “new leaders” when asked if Biden should run in 2024. Romero was asked whether more Democrats “feel like Tim Ryan” or Harris in terms of a Biden 2024 bid.

“This so-called sudden desire to see a generational change by Congressman Ryan, it’s once again, it’s like the definition of secure,” said Romero. “Nobody believes it, it’s gaslighting.”

The White House did not respond to a request for comment.