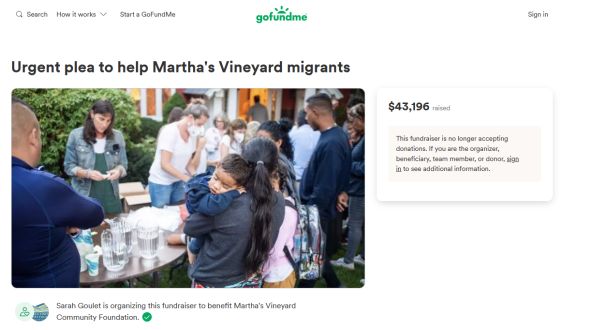 As of Friday afternoon, the affluent community's "urgent plea" has raised over $42,000. The proceeds are benefiting the Martha's Vineyard Community Foundation (MVCF) whose mission includes putting "charitable contributions to work for the people of Martha's Vineyard by making grants that address community priorities" and "dispersing emergency response funding during extreme times of need." MVCF builds and invests its endowment to "provide continued resources for enhance[ing] and preserving the quality of life on the Vineyard."

MVCF is the permanent endowment for Martha's Vineyard and has grown to assets under management of over $14 million dollars, according to its financials page. MVCF's current causes accepting monetary gifts include the Climate Action Fund, which backs projects "that address the effects of climate change on the Island; the Islanders Write festival, a free event where authors come together "for robust conversation about the art, craft and business of writing;" and the Diversity Coalition Charitable Trust, which is dedicated to "eradicat[ing] racism," understanding "the barriers that prevent equal rights for all," and "ultimately eliminate inequality and injustice."