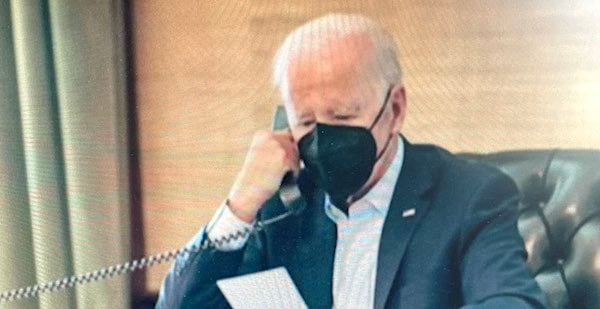 President Biden shown in a White House video July 22, 2022, isolating from his staff after he was diagnosed with COVID-19. (Video screenshot)

The CDC has quietly eased masking guidance for health care settings while most schools have lifted the requirement.

The assumption remains among public health officials, nevertheless, that masking prevents the spread of COVID-19, as seen in the return of a mask mandate at a New Jersey high school after "more than three individuals" tested positive.

But studies of real-world data long have demonstrated the ineffectiveness of masking – while posing health risks of their own and possibly exacerbating the spread of disease – and a new study of nearly 600,000 students in 1,907 schools in Spain found that their use in classrooms made "no significant difference" in infection rates.

The study, "Unravelling the Role of the Mandatory use of Face Covering Masks for the Control of SARS-CoV-2 in Schools: a Quasi-Experimental Study Nested in a Population-Based Cohort in Catalonia (Spain)," was published in the August edition of the peer-reviewed journal Archives of Disease in Childhood, which is a part of the British Medical Journal Group, the National Pulse reported.

The researchers, according to a summary, analyzed "routinely collected health data" to compare the incidence of SARS-CoV-2 in those with masks and those without during the first term of the 2021–2022 school year.

The study's intent was not to measure the individual effectiveness of masks but to evaluate their effect in stopped the spread in schools.

"In conclusion, [mask] mandates in schools showed no significant differences in terms of transmission, the researchers said. "Conversely, we found that age is a key component explaining transmission in children."

An ABC News online report last Friday said that "as the United States heads into the fall and winter, questions are arising about whether the return of masks is needed to stem a potential COVID-19 surge."

However, New York Times reporter David Leonhardt pointed out in May the data show that in U.S. cities "where mask use has been more common, Covid has spread at a similar rate as in mask-resistant cities."

WND reported a study comparing data between counties in Kansas found that those that mandated masks for COVID-19 had a higher rate of death than those that did not.

A former adviser to the World Health Organization and the U.S. Department of Health and Human Services has compiled a list of more than 150 studies and articles presenting data and evidence that universal masking is ineffective in stopping the spread of SARS-CoV-2 and causes harm.

White House coronavirus adviser Dr. Anthony Fauci, in fact, told then Health and Human Services Secretary Sylvia Burwell in a February 2020 email that he didn't recommend universal masking, arguing masks "are really for infected people to prevent them from spreading infection to people who are not infected rather than protecting uninfected people from acquiring infection." Similarly, Fauci spoke out against universal masking amid a pandemic in a "60 Minutes" interview one month later. He warned of "unintended consequences," saying there's "no reason to be walking around with a mask" in "the middle of an outbreak."