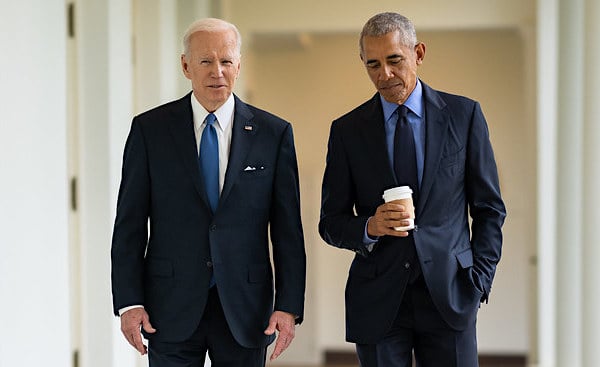 Republicans, contends former Democratic President Barack Obama, are making immigration a big issue in the midterms because the party's base is racist.

Speaking to a meeting of Hispanic realtors in San Diego, Obama said that, at the moment, the "biggest fuel behind the Republican agenda is related to immigration and the fear that somehow America’s character is going to be changed if, people of darker shades, there are too many of them here."

The former president – who received the votes of many white Republicans in 2008 who wanted to see a black man finally reach the White House – claimed Sunday that the GOP is overtly racist, the San Diego Union-Tribune reported.

"I wish I could be more euphemistic about it except [they're] not that subtle about it – they're just kind of saying it," Obama said.

"You hear it on hard-right media, you hear it from candidates and politicians, you hear things like 'great replacement theory' – I mean, this is not subtle," he said. "Unless we're able to return to a more inclusive vision inside the Republican Party, it's going to be hard to get a bill done."

The discredited Southern Poverty Law Center is one of the biggest promoters of the slanderous claim that the Republican base is motivated by belief in the "great replacement theory," the idea that people of color are being brought into the United States and other Western countries to "replace" white people.

However, the chief concerns about illegal immigration – the threats to national security, community and personal safety, jobs, the economy, public education and social services – are shared by people of all backgrounds and colors.

In fact, voters in hispanic-majority communities near the southern border in Texas have made their views known at the ballot box amid a record surge of illegal immigration since President Biden eliminated former President Trump's key policies.

Rep. Mayra Flores – the first Republican elected to Congress in her area of South Texas in 150 years – contended Tuesday that Democrats are not in touch with reality.

"We're sick and tired of this administration acting like this humanitarian crisis is not happening," she said in a live Fox News interview.

Thousands of people are coming across the border illegally every day, she said, including women who have been raped on their journey, and children, some of whom have also suffered abuse.

"This menace must stop," she said. "We're asking the Biden administration to come to south Texas."

Flores said it's "clear the Biden administration doesn't care about South Texas," noting that even the warnings of Democratic Rep. Henry Cuellar, who also represents a border district, have not been heeded.

Flores defeated her nearest Democratic competitor in a special election in June, Dan Sanchez, by 51% to 43.3%. Significantly, Flores narrowly won Cameron County, which Biden won by 13 points two years ago.

Flores said that since Democrats aren't listening to Cuellar, he "should step away from the party that no longer represents us in south Texas."