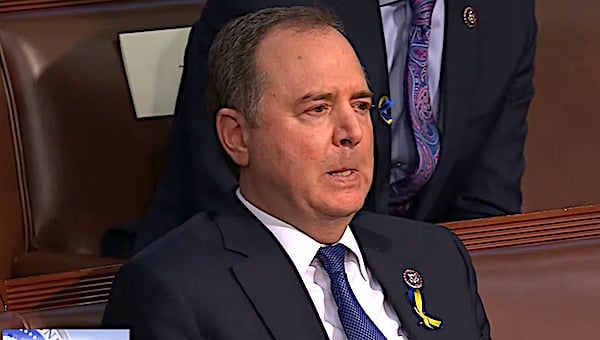 It was during House Speaker Nancy Pelosi's first attempt to impeach President Trump that a rift developed in her party, according to a new book.

The attempt eventually faced a rejection in the U.S. Senate, as did a subsequent attempt a year later that was launched without evidence, witnesses or testimony, and held even after Trump as finished his first term.

Critics even say Pelosi's special partisan committee appointed to "investigate" the Jan. 6, 2021, riot at the Capitol, focusing almost exclusively on any way that Trump could be blamed, now is Pelosi's third strike.

But it was during her first attempt, late in 2019, that the controversy erupted, Fox News is reporting is alleged in a book,

They contend Rep. Jerry Nadler, D-N.Y., took issue with how Rep. Adam, Schiff, D-Calif., who was assigned by Pelosi to lead her impeachment agenda, was operating. 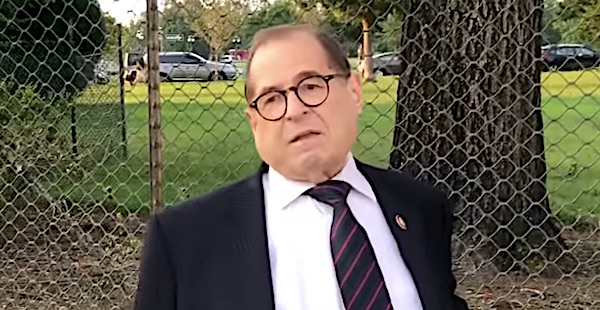 That impeachment was created because Trump had expressed concern in a telephone call with Ukrainian officials about their investigation into corruption there.

The evidence now shows that Joe Biden's son, Hunter, was getting paid tens of thousands of dollars from a gas company, an industry in which he had no experience, in what now appears to have been an influence peddling operation.

Trump was concerned about U.S. aid, given allegations of corruption, and asked about the review of those claims.

Further, Biden, as vice president, went to Ukraine and threatened the nation with the loss of American help if the prosecutor looking into that problem wasn't fired immediately.

He even bragged about it:

Trump's telephone call was overheard by someone, and someone else, who didn't hear the call, filed a whistleblower complaint against the president, who was accused by Democrats of soliciting interference from a foreign country.

Pelosi's impeachment campaign was launched, and Trump was cleared of all charges by the Senate.

It was Nadler, when he learned the Judiciary Committee would have no cross-examination of witnesses, who concluded to Schiff, who famously claimed that the Democrats' "Russiagate" collusion theory from 2016, by then completely debunked, was true, "It's unfair, and it's unprecedented, and it's unconstitutional."

Schiff scolded back, "I don’t appreciate your tone. I worry you’re putting us in a box for our investigation," the book said.

The report noted that put Nadler at odds with Pelosi, and he "hired attorneys and had his team pour through records and books from the impeachments of former Presidents Nixon and Johnson" to regain approval.

Pelosi "didn’t want the Judiciary panel to interview witnesses at all. Pelosi simply didn’t trust the panel — which was stacked with liberal crusaders and hotheaded conservatives — to handle the rollout of the complex Ukraine narrative with the careful, compelling treatment it required. She couldn’t afford another Nadler screwup. The Judiciary chairman could focus on the legal business of crafting the articles of impeachment and have academics testify, she allowed. But that was it," the report said. 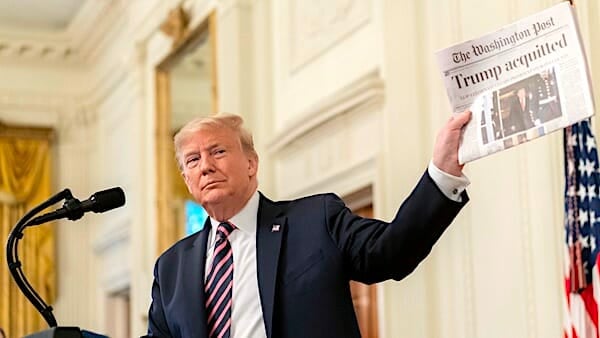 President Donald J. Trump shows a newspaper headline during his address Thursday, Feb. 6, 2020 in the East Room of the White House, in response to being acquitted in the U.S. Senate impeachment irial. (Official White House photo by D. Myles Cullen)

But Nadler's research showed presidents facing impeachment were, in fact, allowed to defend themselves in the Judiciary Committee.

"That did not matter to Schiff, and the fact that Trump would not be able to face his accusers before being impeached did not sit right with Nadler, who warned Pelosi and Schiff of the ramifications it would have in the long run," the report said.

But the book, suggesting Pelosi and Schiff were attempting to control all messaging leading up to the 2020 vote, wouldn't allow Trump attorneys to speak at hearings, because of what they could say.

The conflict deepened as the process, ignoring Nadler's concerns about due process, progressed, the book said.

Meanwhile, the book reports, Pelosi was intent on making the impeachment allegations all about national security, and wanted to campaign that way to "rural voters, evangelicals and Republicans."