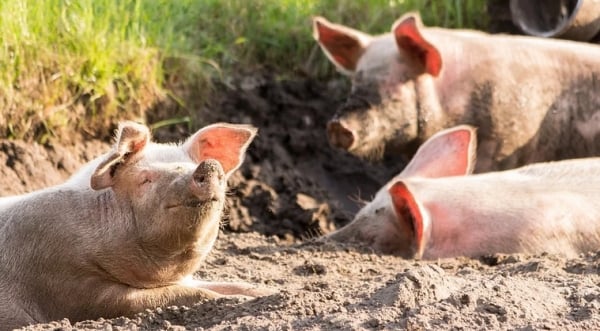 On October 11th at the Supreme Court, America’s pork farmers will stand trial.

The formal question before the justices will be the constitutionality of California’s 2018 initiative-passed Proposition 12. If the farmers lose, a state will be allowed to enforce a regulation on out-of-state production methods. Historically, states could regulate only the character and quality of products made elsewhere (via product safety standards, for example), not the means of making them.

But alongside the constitutional question will be public judgment on the morality of American pig farming. The case arose because accusers skillful in modern media but ignorant of modern pig farming charged U.S. pig farmers with cruelty to their animals. Prop 12 bans in-state sale of pork from pigs born anywhere to sows housed in so-called “gestation crates” (protective pens) that don’t meet California space specifications, which almost none in the nation do. It ignores that other states – such as Ohio – have other rules, some in conflict with California’s.

Among the pig farmers’ accusers, the most surprisingly clueless have been academic economists who filed briefs saying that pig farmers could easily comply with Proposition 12’s requirements.

It sounds simple, but sometimes, with each movement to a new stage and a new farm, growing pigs can be combined with pigs from other farms. Tracking which pig was born to which sow at which farms adds a level of complexity and legal risk that major processors will not accept. Rather than deal with higher costs and exposure, they will demand that all farms comply or charge consumers a big premium. I can say with 100 percent certainty, when that happens, our barns will have to be shuttered. Our family cannot afford the compliance costs.

One economist who denies this fact of pig farming life has insisted that specialized breeding, even for “cage free” raising of pigs, already occurs. But what works on a small, almost artisan scale, for highly affluent customers cannot feed a nation. He listed the retailers who embrace Prop 12 standards, led by Whole Food Markets. According to a recently published marketing study, the typical Whole Foods shopper is “a West Coast millennial woman between 25 and 34-years-old [with] a graduate degree and an annual income of more than $80,000.” The median American household income is $65,000; 68 percent of adults have no college degree at all. The professor lives in a very different world than most Americans. Pig farmers must serve all America.

The critics who brought the case seem unaware of (or choose to ignore) contemporary American hog care standards. In the past two decades, pig husbandry in the United States has changed dramatically.  Pig farmers (who led the change), swine veterinarians (now an important specialty), federal and state governments (which set a floor to humanitarian standards), bankers (who financed the unprecedented increase in the standards of pig housing, feeding, and sanitation) and many others revolutionized the field.

Consider this: Historically, throughout the world, pig raising standards have been very bad. In many places pigs were fed rotted table scraps and other garbage. As late as the 1980s, American families routinely over-cooked pork products. Parents worried that pork would give their children debilitating trichinosis. Overcooking was to kill the parasite.

Today, U.S. pigs consume a healthy combination of corn and soymeal. They live in temperature-controlled housing kept clean to almost hospital standards. The trichinosis threat is largely forgotten, even as pork price inflation from 1969 to today has lagged overall inflation by more than 20 percent.

At the same time, pig farms are safer for pigs. Because pigs can be extremely aggressive toward one another, during vulnerable periods in their lifecycles sows are now moved to carefully designed individual stalls. This specialized housing is the excuse that anti-meat activists have used to attack us.

Pig farmers cannot believe these attacks. They have dedicated their lives to providing the nation with a healthy source of protein and other nutrients at a price ordinary families can afford — and doing it ever more humanely. The public benefits have been enormous, and the treatment of pigs is now by far the best in the world.

Pig farmers take seriously their duty to make available the nourishment that American families put on their tables. Let’s hope the justices understand that.

Thomas Titus is an Illinois farmer of corn, soybeans, and pigs.