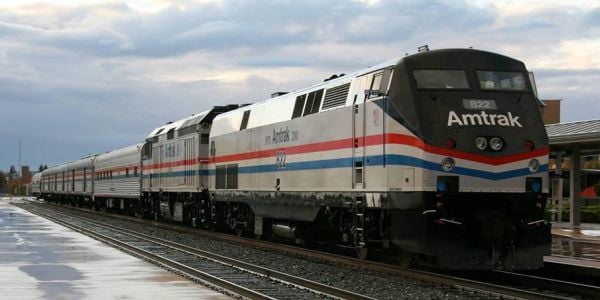 Northeastern Pennsylvania has a long and storied railroad history. Critical freight passes through the region by rail daily, and railroad history is celebrated at the Steamtown National Historic Site in Scranton. It has been decades, though, since regular passenger service has run into or out of Scranton or Wilkes-Barre.

For many years, rail enthusiasts, public transportation advocates, and policymakers alike have called for restoration of passenger service to Scranton, connecting it to New York City and thereby the national Amtrak rail network. The federal Bipartisan Infrastructure Law passed last year provides an opportunity to make it happen.

The bill provides $66 billion to support enhancement of existing rail service and creation of new services as part of the Amtrak Connects US initiative. The plan includes proposed service from New York City to Scranton, with intermediate stops in the Poconos and Northern New Jersey.

Progress is already underway on a project that would set the stage. In April 2022, New Jersey Transit approved a contract for construction work that would extend service further west to Andover, N.J., by restoring portions of the Lackawanna Cutoff, an abandoned rail right of way through Northwestern New Jersey critical to establishing service to Northeastern Pennsylvania. Restoration of passenger rail to Northeastern Pennsylvania has consequently never appeared closer to reality.

The benefits of passenger rail to this region are numerous. Amtrak has projected $2.9 billion in initial economic activity from construction jobs created for the project. Workers in various occupations will also be needed in support services.

After the service is operational, Amtrak estimates $87 million annually in economic impact, assuming three daily round trips between New York City and Scranton. These impacts include jobs created related to operating the railroads in the area, tourism, and from new business development that results from the service, and ripple effects from those travellers spending their money locally.

The tourism impacts are particularly notable. Travel is already an important economic driver to the region. The Pocono Mountains region and the Upstate Pennsylvania region (including Lackawanna and Luzerne Counties) are already the fourth- and fifth-largest tourism markets in Pennsylvania, after Pennsylvania Dutch Country, Greater Philadelphia, and Greater Pittsburgh. Even in 2020, amid a dip in travel because of the pandemic, travel and tourism supported 21,630 jobs in the Poconos region and 13,660 jobs in the Upstate region. Opening the region to new visitors by rail sets the stage for these travel-impact numbers to sustain and grow.

Amtrak’s impact analysis also notes the numerous connections to higher education institutions along the route. The route could help connect students from outside the area with Penn State Scranton, Marywood University, the University of Scranton, Lackawanna College, and East Stroudsburg University.

Rail can also help the region with ongoing workforce challenges. In addition to being attractive to businesses looking to invest in the region, rail service could help attract and retain a talented workforce. The Institute’s past research on regional talent needs has shown that Lackawanna and Luzerne Counties are experiencing a structural deficit of workers, including in key skilled professions in health care, manufacturing, logistics, and more. Rail service could be a selling point to market the region as an attractive place to live, work, and raise a family.

All these economic benefits are in addition to the potential environmental benefits that would come from a shift toward rail travel, as well as quality of life improvements for residents near the corridor.

The most important question is how our leaders can best support this effort to restore passenger rail service. As directed in the Bipartisan Infrastructure Law, the Department of Transportation earlier this year established the Corridor ID Program to coordinate the planning of intercity rail service to guide future development. Now Northeastern Pennsylvania needs its elected officials, regional planners, economic developers, business community, and the general public to be advocates for this critical investment.

This article was originally published by RealClearPennsylvania and made available via RealClearWire.