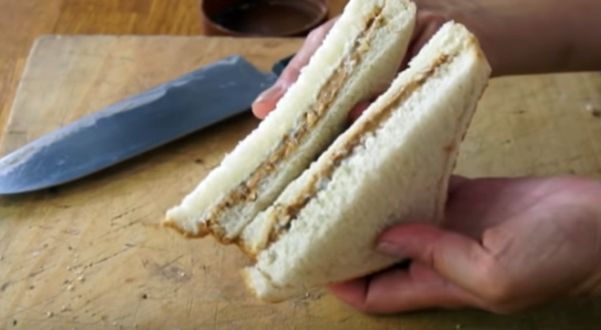 (ATLAS OBSCURA) – During the Great Depression, people valued high-calorie combinations of protein and fat. Meat and dairy were costly, and consuming enough energy could prove challenging. Enter peanut butter and mayonnaise on white bread. The combination became a staple in Southern households in the United States and, in some regions, it was as ubiquitous as peanut butter and jelly.

For the next 30 years or so, the PB&M was a favorite in many American kitchens, perhaps because adding mayonnaise to the era’s rustic, coarse-nut butter may have been key for spreadability. According to Garden & Gun, newspapers from the 1940s in Salt Lake City, Utah, and Troy, New York, both advised adding mayonnaise to “moisten” or “thin” peanut butter before adding bacon or shredded American cheese.

In the 1960s, Hellman’s Mayonnaise debuted an advertisement suggesting fun ways to spice up the basic peanut butter & mayo sandwich. To make a “Double Crunch,” one simply added bacon and pickles. A “Funny Face” called for raisins and carrots (and some degree of artistic capability). The “Apple Fandango” featured sliced apples and marmalade, while the “Crazy Combo” – you’ve been warned – included salami, sliced eggs, and onions.