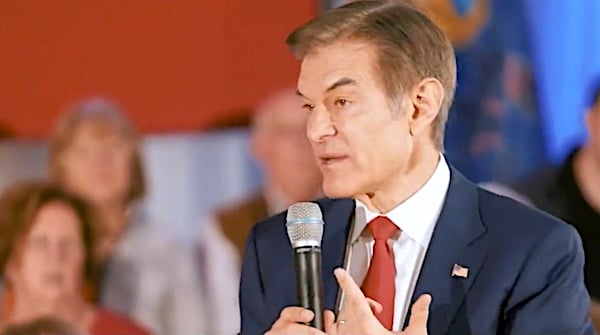 Dr. Mehmet Oz, a Republican candidate for the U.S. Senate in Pennsylvania, has been under fire politically for still having citizenship in Turkey.

But now he's explained why he made that decision, and it's actually generating support for his campaign.

It's because maintaining that status allows him to retain the authority to make decisions for his mother, an Alzheimer's patient who lives in Turkey.

At the Gateway Pundit, a video was posted with his explanation:

Now I see why Fetterman is scared to debate Dr. Oz. Watch him dismantle the "Turkish" narrative that Fetterman has painted. pic.twitter.com/DOh7eJjX5B

Question: "How do you feel about dual citizenship with other countries especially being a civil servant as you would be as a senator?"

Dr. Mehmet Oz: "Thank you for asking that question. The reason this is coming up is because of my opponent making a big deal out of the fact that I was born in this country but my father and mother as I mentioned were Turkish immigrants. So, by Turkish law, you are allowed to keep your citizenship. Which I have kept for only one reason my mom has Alzheimer's, Ben [Carson] knows a lot about that ailment, it is a horrible disease that 6 million Americans are afflicted by, my mom lives in Turkey with it. And you lose your loved ones twice. You lose them when they forget you and then you lose them when you lose them.

"My one sister has mental-health issues and so I have a restraining order against her in Turkey. This is a lot of dirty underwear but I’m pretty transparent about who I am. So, I’ve maintained my Turkish citizenship so I have custodial control over her health care and I would compromise that if I gave it up. I have agreed, because this is a distraction, I’m honored to be serving you, that I would give up my Turkish citizenship before I serve in the Senate."

Audience members immediately told him: "You shouldn't have to!"

He said he knows.

"I shouldn’t have to and I can love my mom and my country at the same time but this is politics. Issues come up and I don’t want it to be in the back of anyone’s mind, well-meaning or not so I have already made that commitment and found ways with my family to address this."