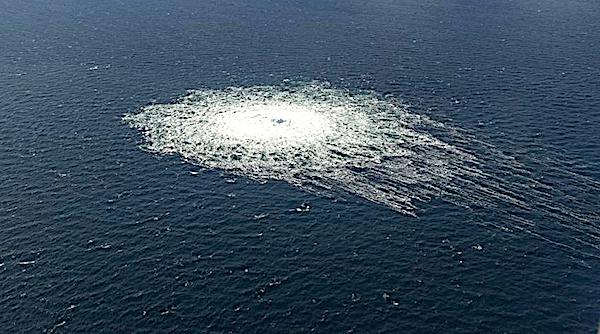 A large disturbance in the sea can be observed off the coast of the Danish island of Bornholm Tuesday, Sept. 27, 2022, following a series of unusual leaks on two natural gas pipelines running from Russia under the Baltic Sea to Germany have triggered concerns about possible sabotage. Danish Prime Minister Mette Frederiksen says she 'cannot rule out' sabotage after three leaks were detected on Nord Stream 1 and 2. (Danish Defense Command)

This week the Nord Stream 1 and Nord Stream 2 Russian gas pipelines under the Baltic Sea, which had been shut down by Russia amid its war on Ukraine after they were built to supply energy to Germany and other points, were found to have massive leaks, leaving gas bubbling to the surface.

And sabotage is suspected.

Now multiple reports confirm that the CIA had warned Germany weeks ago that there could be war-like attacks on the supply lines.

The Washington Examiner reports a German official declined to comment on the record, but multiple local sources were confirming that the CIA tipped off the government there.

The pipelines are considered crucial infrastructure to managing the energy crisis in Russia and Ukraine that has developed because of Vladimir Putin's decision to invade Ukraine and create a horrific war against its citizens.

Authorities in the region had reported two explosions were detected, both on Monday and several hours apart.

The leaks were detected and Nord Stream AG, the company running the lines, is promising an investigation.

"Currently, it is not possible to estimate a timeframe for restoring the gas transport infrastructure," the company said in a statement. "The causes of the incident will be clarified as a result of the investigation."

The New York Post also cited the suspicion of sabotage.

In fact, a Swedish national police official said in a statement, "We have established a report and the crime classification is gross sabotage."

Seismic monitoring stations in Sweden, Finland and Norway all documented the explosions, the larger registering 2.3 on the Richter scale.

Bjorn Lund, of the Swedish National Seismic Network, confirmed, "There's no doubt this is not an earthquake."

The apparent destruction brought immediately to mind a promise from Joe Biden, just about a year ago, that if Russia invaded Ukraine, there soon would no longer be a Nord Stream 2 pipeline.

In fact, Biden said at the time that, "If Russia invades … there will be no longer a Nord Stream 2. We will bring an end to it."

The Daily Caller News Foundation reported at least one Polish official was celebrating.

That nation has its own pipeline project that is to bring Norwegian natural gas to Poland through Denmark.

The report explained the official explained, "All Ukrainian and Baltic sea states have opposed Nordstream's construction for 20 years. Now $20 billion of scrap metal lies at the bottom of the sea, another cost to Russia of its criminal decision to invade Ukraine."

The New York Post described Nord Stream as "a major artery for natural gas transport between Russia and Europe" but also said it is a "flashpoint in the economic cold war over Russia's invasion of Ukraine."

Gas deliveries have been halted now for months, as Moscow has blamed "technical issues."

At the Gateway Pundit, the impact was being assessed.

The report said already before the damage, "thousands of people … in Germany marched against Socialist Olaf Scholz’s policy and the explosion of energy and gas prices in Germany. The protesters called for an end to sanctions on Russia and the reopening of the Nord Stream 2 gas pipeline."

The report also noted AA was reporting, "According to police, the largest protests took place in the state of Thuringia. Nearly 24,000 people are said to have taken part in the demonstrations across the state."

One protest banner read, "We’re all in the same boat. Without Russian gas, our economy will be dead!"