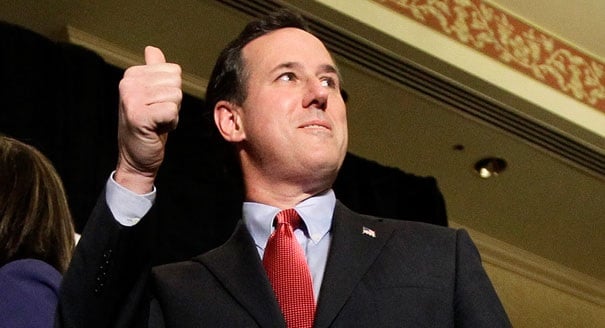 Democrats, up to and including Joe Biden, lately have taken to using a new talking point: Republicans are destroying democracy.

The GOP members apparently can do this through wanting election security, limits on abortion, and other such radical concepts, Biden contends.

He actually accused the 74 million Americans who voted for President Trump in 2020 of doing exactly that.

But in a new commentary at Real Clear Wire, former Sen. Rick Santorum, R-Pa., explains it's all a matter of projection.

The Democrats, in fact, are actually doing what they accuse Republicans of doing, he said.

"It should come as no surprise that under this administration one of the most vital 'independent' agencies is being led by an avowed leftist ideologue intent on casting aside all agencies' traditions and limits on power to advance a socialist agenda. The Federal Trade Commission, under Lina Khan, has become one of the worst examples of the out-of-control administrative state that ignores the constitution and violates the rule of law to permanently change our free market system."

Santorum continued, "With oversight responsibilities over consumer and antitrust issues, the FTC has historically been a serious and non-partisan agency. That has radically changed under the current leadership. Khan has engaged in what the Wall Street Journal called a 'power grab,' muscling through rules changes that strengthened her and marginalized the FTC’s minority members and even staff. Khan has continued to push through rule changes and investigations in partisan 3-2 votes."

He said, "As Joe Biden assaults conservatives as a threat to democracy, his deep state henchmen are actually destroying it. As Christine Wilson, one of the two Republican-appointed members of the commission said, '[t]he commission, if nothing else, has been revered for its bipartisanship and collegiality. And that has been destroyed in recent months.'"

Santorum charged that Khan and other "leftist crusaders" have changed the idea of protecting consumers to protecting "the public," and under that banner, they have pursued the "woke" agenda that Biden is using, "weaponizing yet another agency to transform America."

The FTC, in fact, recently removed a mission statement reference to its pledge to not "unduly" burden business activity, "because they have every intention to burden businesses with woke capitalism at huge cost to American consumers," Santorum said.

Khan, in fact, has stated that "going too far" is not a concern.

The political agenda, and the weaponry the FTC holds, already have attracted attention from the Office of Inspector General, which criticized the use of unpaid consultants, and Congress, where Rep. Jim Jordan of the House Judiciary Committee Jim Jordan told Khan to preserve all documents and communications regarding those consultants.

Santorum documented that the FTC's agenda also is being challenged in court, as the Supreme Court this fall will hear arguments over its actions.

Even Walmart has accused the FTC of using "expansive legal theories that contravene clear constitutional and statutory limits" on its authority, in a dispute over third-party fraudsters.

Santorum said has, under a Biden administration, "The ever-expansive administrative state, led by agencies like the FTC (among others) is posing a grave danger to our constitution, our economy, and our freedom."