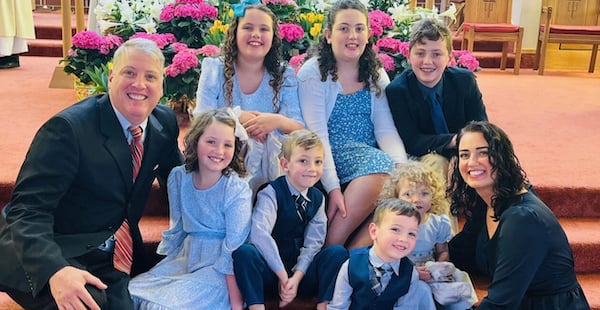 The family of Mark and Ryan-Marie Houck

Mark Houck, 48, is a Catholic pro-life activist who showed up every Wednesday on the public sidewalk outside a Planned Parenthood clinic in Philadelphia to provide counsel to women seeking an alternative to abortion.

On a Wednesday in October 2021, a volunteer escort at the clinic, 72-year-old Bruce Love, threatened Houck's 12-year-old son, yelling obscenities at the boy. Houck, when Love got too close to his son and continued with "crude," vulgar slurs, according to the family, pushed the volunteer away and he fell down, requiring only a band aid on Love's finger. Philadelphia District Attorney Larry Krasner – a George Soros ally who is no supporter of the pro-life movement – decided not to press charges. Love filed a private complaint against Houck but never bothered to show up in court, and the case was thrown out.

Nevertheless, the Justice Department took up the case, and last week, as many as 30 FBI agents in tactical gear showed up at the home of Mark Houck, his wife, Ryan-Marie, and seven children, and arrested him at gunpoint.

Ryan-Marie described the dramatic arrest at their home in Kintnersville, Pennsylvania, in an interview Wednesday night on Tucker Carlson's Fox News show.

"My entire front yard, you could barely see it. It was covered with at least 15 big cars and trucks," she told Carlson.

She said it was a "devastating" experience for her family, noting the children are undergoing counseling, and there is "a lot of crying and a lot of unrestful sleep."

"I mean it's hard to even express, the victimization and how traumatized we all are," Ryan-Marie Houck said.

Mark Houck has pleaded not guilty to a charge of violating the federal Freedom of Access to Clinic Entrances Act, known as the FACE Act. A conviction could result in a maximum 11 years in prison, three years of supervised release and fines of up to $350,000.

Ryan-Marie, told LifeSite News that during the arrest, her husband pleaded with the agent at the door: "Please, I'm going to open the door, but, please, my children are in the home. I have seven babies in the house." But the agents "just kept pounding and screaming," she said.

The agents "had big, huge rifles pointed at Mark and pointed at me and kind of pointed throughout the house," she said.

Carlson asked Houck's lawyer, Peter Breen, if he had every seen anything like the raid on the Houck's home.

"Not at all," the attorney replied. "This was reckless and outrageous. It put the Houck family in unnecessary danger."

Breen said Peter Houck had offered to turn himself in. In June, Houck's legal team responding in writing with the offer and also made calls to the U.S. Attorney.

But there was no response, Breen said, and the next thing he heard from the Justice Department was that his client was in custody.

"Even if you're going to arrest a regular person, you just send a couple of agents, they knock on the door – not dragging the head of the family out, violating the sanctity of the home, pointing guns at them," the attorney told Carlson.

"This was outrageous and uncalled for."

Breen confirmed that local authorities did not press charges and that the local courts threw out the alleged victim's lawsuit.

The matter should have ended right there, Breen emphasized.

"This was not a federal crime. We have controlling case law on that, strong defenses," he said.

"But, instead, they've taken an innocent man and made an example out of him, presumably to send a message to pro-life people and people of faith across this country."

The DOJ sent a team of federal agents with rifles to the home of a pro-life activist named Mark Houck. Now Houck faces 11 years in prison for protecting his son from an abortion extremist. pic.twitter.com/eFmrnKKSO5

Hans A. von Spakovsky and Charles Stimson, who are both senior legal fellows for the Heritage Foundation in Washington, D.C., agreed that the raid of Houck's home was designed to send a warning to pro-life activists.

"It is not a coincidence, we suspect, that this takedown of someone who, at best, committed a misdemeanor assault came almost exactly three months after the Supreme Court issued its decision in Dobbs v. Jackson Women’s Health Organization, which overruled Roe v. Wade and abortion on demand in America," they wrote.

"The FBI's raid of Houck’s home was designed to send a warning to pro-life activists engaging in activities protected by the First Amendment."

They said that the Justice Department, under Democratic administrations, has a history of misusing the FACE Act to target abortion opponents.

In 2012, for example, a federal judge in Florida excoriated the Justice Department for indicting a pro-life activist, charging it was the "product of a concerted effort between the government" and the abortion clinic to stop the woman's pro-life efforts rather than enforce the statute.