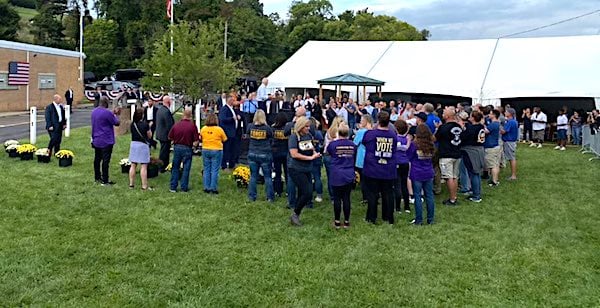 Joe Biden scheduled the Labor Day weekend, typically the start of an intense campaign season during election years like 2022, to be filled with his appearances on behalf of Democrat candidates.

But he's being mocked for the events, which were far from filled:

Your tweet was quoted in an article by Mail https://t.co/XpE4dxU1VC

The Daily Mail characterized his fan following as "pitifully small" at one appearance.

And a network's video report confirmed the tiny attendance:

Stop #2 of ⁦@POTUS⁩’ Labor Day Travel: West Mifflin, PA. Per the WH, The President is greeting with ⁦@JohnFetterman⁩ here pic.twitter.com/CRf6MxmyWT

The Post reported, "Other Twitter users noted the low turnout, with one asking NBC News reporter Kelly O’Donnell: 'Biden in Pittsburgh. Same speech he gave in Wisconsin, much less energy. Why? Where is the crowd in Pittsburgh? Where’s the turnout?'"

"A sparse group of union members and their families turned up for Mr. Biden’s campaign rally at the United Steelworkers of America Local Union 2227 in West Mifflin, a town southeast of Pittsburgh," the report said.

"The event was open to members of the union, their families, and state and local elected officials," the report explained.

Another social media observer pointed out that Trump recently was in the state, for a rally.

"Trump fills stadiums, Biden has to count his security detail as part of his 'crowd,'" the post read.

In fact, it pointed out that Democrat candidates "have been apprehensive about campaigning alongside Mr. Biden, who has faced months of low approval ratings.'

CBS reported it was Biden's third trip to Pennsylvania in less than a week.

"I think it's face-plant after face-plant, Bret," he said.