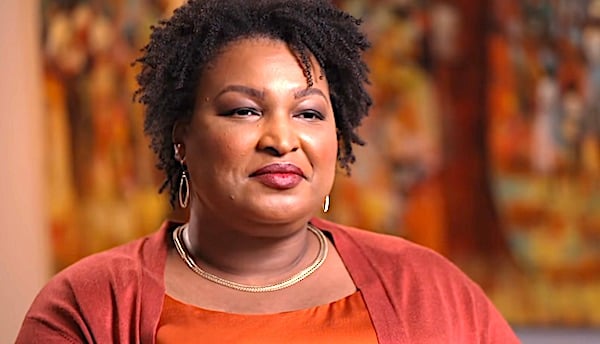 Georgia's failed Democrat candidate for governor, Stacy Abrams, is being ridiculed for her claim during a recorded appearance that there is no such thing as a fetal heartbeat, and it's all a "manufactured sound designed to convince people that men have the right to take control of a woman's body."

At The Gateway Pundit, she's being corrected by radiologist Radheep J. Shanker, who refuted her claim.

"Dr. Stacey Abrams, MD has thoughts, people. Stacey Abrams if you wish to be educated, I'd be more than happy to show you the actual heartbeat of a six-week-old fetus. It's not an imaginary thing, no matter how much you want it to be."

It was RNC Research that captured Abrams' claim, and put it online. She said, "There is no such thing as a heartbeat at six weeks. It is a manufactured sound designed to convince people that men have the right to take control of a woman's body."

Georgia Democrat Stacey Abrams: "There is no such thing as a heartbeat at six weeks. It is a manufactured sound designed to convince people that men have the right to take control of a woman's body."

Shanker responded, with the science:

Is the fetal heart fully developed? OF COURSE NOT. But it is still contracting, in the process of its development.

I could go through the embryology of this...but I hated embryology. Note that by five weeks, the fetal heart has four chambers, an aortic tract, and contracts. pic.twitter.com/NVvttwkY3C

He asked, is the heart fully developed?

"OF COURSE NOT. But it is still contracting, in the process of its development. I could go through the embryology of this … but I hated embryology. Note that by five weeks, the fetal heart has four chambers, an aortic tract, and contracts."

Healthline documents that a fetal heartbeat "may first be detected by a vaginal ultrasound as early as 5 1/2 to 6 weeks after gestation."

Shanker continued, "And look how Democrats are perfectly happy with Stacey Abrams spreading scientific misinformation to young people (who are nodding along, even though they are being told a lie). Apparently, misinformation only matters when it is inconvenient?"

Dr. Grazie Christie, M.D., a radiologist, said, "Stacey Abrams is wrong. This is not just a manufactured thing, this is science. It’s called the science of doppler signals; it has to do with sound waves. It’s all very complicated but very beautiful."

Christie continued, "What we are hearing is the doppler signal of blood flowing in one direction and then the other, and thats what we see when we put our cursor over the embryonic heart. We can see the blood flow … we can watch the valves flutter and we can watch the walls of the heart also move as the baby’s heart beats. Interestingly fetal heart rate is much faster than mom’s; thats how we know we’ve found the baby’s heartbeat."