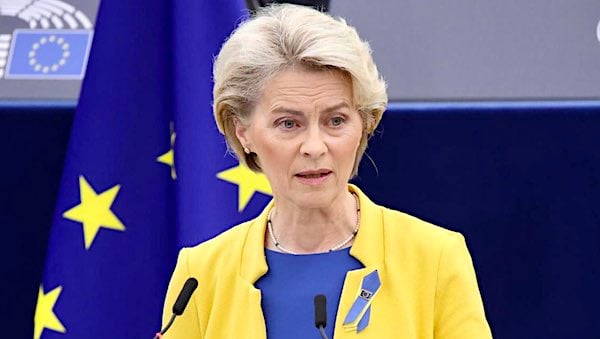 To further independence from China, the EU will have to actively seek out instances of covert influence and develop alternative supply chains and processing capacity for necessary material, European Commission (EC) President Ursula von der Leyen said in a State of the Union speech Wednesday. The subversive threat China poses to European democracy includes influence and disinformation campaigns at EU universities and dominance over processing of critical minerals, she said.

“Many of us have taken democracy for granted for too long. Especially those, like me, who have never experienced what it means to live under the fist of an authoritarian regime,” Von der Leyen said.

Von der Leyen announced a “Defense of Democracies” initiative to counter social and political interference from foreign autocracies that “target” EU countries and “undermine” EU values. Policies will aim to expose “shady funding” and other forms of covert influence, she said.

“We will not allow any autocracy’s Trojan horses to attack our democracies from within,” said Von der Leyen.

She referenced an instance earlier in 2022, when a university shut down an allegedly independent research center after a local media outlet discovered the center was receiving funding from the Chinese Communist Party, according to Politico. The center purported to champion human rights issues but discounted evidence of Chinese human rights abuses against the Uyghurs.

Von der Leyen also said the EC would work to “identify strategic projects” and build up stockpiles of critical minerals that are vulnerable to supply chain disruptions, reducing dependence on China for supply.

China has significant control over processing of the raw materials used in electronics manufacturing and accounted for 90% of global rare earth element refinement capacity and 60% of lithium in 2019, according to a 2021 International Energy Agency report.

Raw material will fuel our green and digital future.

Almost 90% of rare earths and 60% of lithium are processed in China.

With our Critical Raw Materials Act we will:

The EC also proposed a ban on products made using forced labor Wednesday, citing the International Labor Organization’s estimate that 27.6 million people worldwide are subjected to arbitrary work conditions, Politico reported. The legislation is largely intended to target China’s oppression of the Uyghur population, including inhumane labor programs that force the Uyghurs to work in factories without consent.

“We cannot allow ourselves to be blackmailed,” he said, according to Reuters. While he did not provide specific details of the proposed measures, he said they would include stricter guidelines on accepting Chinese investments and diversification of trading partners.

However, Europe has become increasingly intertwined with China’s natural gas trade as it seeks to fill energy storage facilities in preparation for winter. The EU pledged to end dependence on Russian gas imports, cutting Moscow off from a source of revenue as a punishment for invading Ukraine.