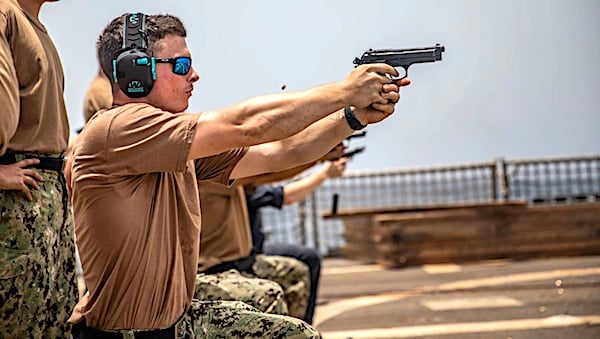 Republicans in Texas have a message for Joe Biden in response to his demands that many weapons be banned.

For those who are not familiar with Texas history, a report in the Center Square adds some detail:

"The phrase is known to Texans as the rallying cry that sparked the Texas Revolution on Oct. 2, 1835, in Gonzalez, Texas. The Mexican Army attempted to take a small cannon that was largely ineffective but used as a scare tactic to thwart Comanche raids and Texans weren’t giving it up without a fight. Their fight ultimately ended in an 18-minute battle in San Jacinto on April 21, 1836."

The newest response from the Texas party is to Biden's continuing vows to ban so-called "assault rifles."

He recently said, on social media, "It’s time we ban assault weapons in this country.”

To which the party says, "Come and Take It.”

The Texas GOP’s platform also suggests that the state legislature and Congress to repeal and/or nullify the National Firearms Act of 1934 and the Gun Control Act of 1968.

The report explained the party also passing unrestricted Constitutional Carry by amending the Texas Constitution; supports nullifying any gun laws that violate the Second Amendment or rights of due process; supports national reciprocity for gun ownership rights; supports recognizing the right of License to Carry holders to carry anywhere that off-duty or retired law enforcement can carry, among other measures.

WND reported only a day earlier that Biden repeatedly has claimed that AR-15 rifles need to be banned in America – part of his gun control agenda – because "the bullet out of an AR-15 travels five times as rapidly as a bullet shot out of any other gun."

But it turns out that like his wild and false claim that certain weapons were banned from private ownership at the ratification of the Second Amendment, he's wrong about this too.

"AR-15 rounds move at approximately 2,700-3,100 fps. Even handgun bullets can reportedly reach around 2,000 fps (though that is rare)," reported legal commentator Jonathan Turley in an article about Biden's inaccuracies.

He explained, "Conservative and gun rights publications have repeatedly shot down that claim but it does not seem to have any impact. As with Biden’s false claim that certain weapons were banned from private ownership at the ratification of the Second Amendment, the president continues to make the same false claim on velocity…"

The column pointed out that "even the Washington Post has called Biden’s repeated velocity claim 'bungled' and factually incorrect," and the AR-15 is only slightly faster than most hunting rifles.

He opined, "Those false statements can be dismissed as just another gaffe or 'Corn Pop' story, but they refer to the factual foundation for gun control under the Second Amendment. Since President Biden is suggesting that such facts are material to a ban, there is a need for accuracy in such details," he wrote.

Incidentally, Biden also has claimed that a ".22-caliber bullet will lodge in the lung, and we can probably get it out — may be able to get it and save the life. A 9mm bullet blows the lung out of the body."